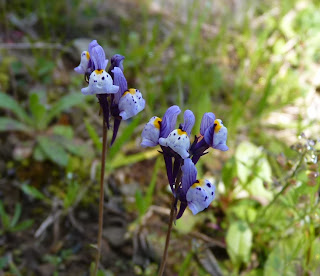 The figures and the contrasts speak for themselves. Last year we were lamenting because of the long winter drought, this year March is ending with a thorough soaking. In Spain, rainfall is recorded in litres per square metre. Last year 0.3 litres/sq.metre fell in March here in the province, this year by 27th (i.e. not counting today's drenching) we had received 144 litres. It has been the wettest March in 44 years and well over three times the average. The rivers are in spate and I have never seen the reservoirs as full as they are now. Indeed, I guess that all must be pretty much at 100% capacity and are releasing water. The ground is sodden and I am unlikely to get anything done in the vegetation garden for a couple of weeks at least. For farmers needing to plant crops now there are big worries. 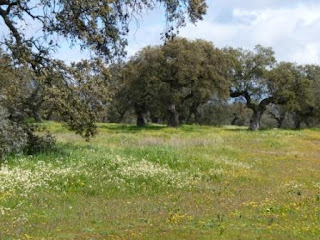 On the plus side, after last year's dearth of early spring flowers, the landscape is blooming. As well as the sought-after orchids of course, there are many other gems. I am particularly fond of the tiny Linaria amethystea an Amethyst Toadflax (photo above), so easy to overlook, and so gorgeous to study in close-up. Even more unobtrusive is this little birthwort Aristolochia paucinervis (photographed by our son, Patrick) 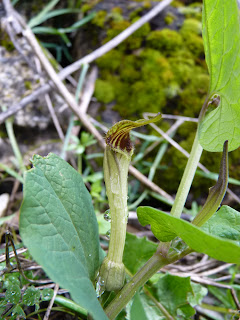 The area of granite outcrops near Trujillo is a veritable rock-garden with an excellent show of attractive Orithogallum concinnum. 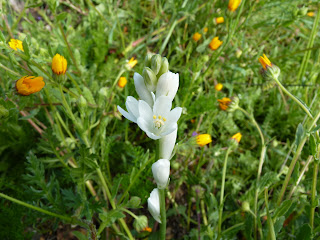 The wet weather of course presents a big challenge for the birdwatching, but it is a question of going out and hoping for the best. There will always be some reward for one's efforts. A couple of day's ago, we opted for going to a wet habitat to match the weather, to the rice fields where every field now has standing water, and the birds have hundred to fields to choose from. It was hard work, but we enjoyed the sight of a field teeming with Meadow Pipits and Yellow Wagtails, the latter all appearing to be males and with at least two subspecies present. Finding four Glossy Ibis and our first Bee-eaters and Collared Pratincoles was the icing on the cake. Margaret Swan, who with her husband Peter, accompanied me on these forays, came back yesterday with a superb photo of Thekla Lark (below) which shows to perfection its field features of the rusty-coloured lower rump, straight bill, greyish-brown plumage and rather stocky appearance. Like the tiny toadflax and birthwort, a species that may not be the most spectacular, but has its own special class of appeal. 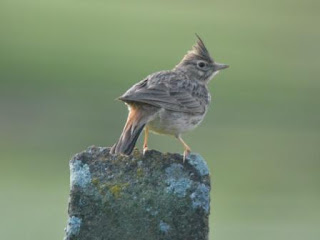 Oretani Wildlife said…
It's the same here in La Mancha, Martin. Sodden fields, full reservoirs releasing water and swollen rivers. I'm almost beginning to think I should go about building an ark! However, it does promise to be a good spring for plantlife...if the rain stops and the sun comes back out.
31 March 2013 at 19:17