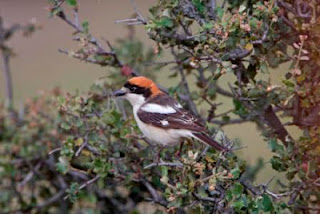 Extremadura has the notoriety of being hot, dry and dusty...but that is not the experience enjoyed by those who come and explore the region at any time from October through to May. We actually get quite a lot of rain here (50% more on average than the annual rainfall of eastern England), but it is highly seasonal. Almost none falls during the summer and the wettest seasons are autumn and spring. The result is that for more than half the year Extremadura is emerald green and with the generous rains we have enjoyed since last October, we have indeed had the pleasure of two "springs" with a carpet of flowers greeting the arrival of the cranes last authumn and the glorious show around us at the moment. Mostly the rain comes as showers, but recently we have had day after day of almost continuous rain, with leaden skies and blusterly winds.

We have three wonderful and enthusiastic guests at the moment: a mother and her daughter from the United States and their old friend, the charming Carmen from Seville, 87 years old and like a little passerine, with a twinkle in her eyes. They had booked sone birding with me and over the last three days I have learnt again that it is always worth heading out into the field, whatever the weather. Each of the three days brought us special moments that will become memories. On the first, to Monfragüe National Park where gloomy weather advises us that few if any birds of prey will be airbourne, especially eagles. That was certainly the case, but we stood mesmerised watching an Otter and her two young playing at the base of a cliff. Whilst we watched she brought a fish, still alive, to the rocky ledge to feed the young, although they seemed happier to be frollicking over and around her. A friend told me that an Eagle Owl was showing well at another site and there it was sheltering from the rain, but in full view. My colleague Jesús Porras (www.iberian-nature.com) took the photo below just a short while later. As we left the park, the rain was easing and a very weak afternoon sun was attempting to push through the clouds. Barely present, it nevertheless gave the cue for the Griffon Vultures who had sat patiently, bedraggled all day, to spread-eagle, dozens upon dozens all panning their immense wings like solar panels, or sails, to dry out their feathers.

The following morning, with the weather equally unsettled, we dodged belts of rain as we found a late winter flock of Little Bustard, with the males showing already their courtship plumage of black and white patterning on the neck, and parties of Great Bustard preened their wet plumage. And although the massive exodus of Common Crane had happened two weeks earlier, there were still skeins (perhaps totalling five hundred birds) moving doggedly in a fixed north-easterly bearing. The final morning the rain was pouring down as we left the house and frankly without much optimism for the day I took my guests to the plains to the west of Trujillo. But, as if rewarded for our persevernce, the skies brightened as we arrived and granted us the spectacle of racing clouds, sheets of passing showers, belts of sunshine, the landscape successively in light and shade. My guests quoted the start of the poem Pied Beauty by Gerard Manley Hopkins:

And so it was. Pin-tailed Sandgrouse, yes too preening their damp plumage, as all birds seemed to be doing, as Golden Plover searched for food beside them; my first Booted Eagle of the year, forced to fly low against the fierce south-westerlies. Great Bustards standing still and wet. When the sun shone briefly, the intensity of the colours in the rain-freshened sky, the swathes of pale yellow crucifers beside the track, with purple sand crocuses tucked in at our feet. A Woodchat Shrike, again my first of the spring, moved from fence to shrub top, hovering briefly over the flowers.

We stopped at a favourite spot, high above a deep, wooded river valley, looking west down to the river pools, where a few weeks ago I watched an Otter fishing. Today a Kingfisher sat, a shock of blue against the green bankside. Again the sun broke through the banks of cloud, and almost on cue a pair of Short-toed Eagles drifted headlong into the wind, followed by a Black Kite and three Griffon Vultures. And then, as the supreme prize of all, a glorious Bonelli's Eagle banked over the hillside below us and then rose gradually to be at eye-level with us and floating just above our heads, the wind almost pushing it closer and closer to us. The sun shone for those precious moments, from behind us, illuminating to perfection the details of the eagle's plumage. But master as it was of the air, the headwind was no match and seemingly without effort it glided overhead and into the sun, a silhouette now. Within minutes the sun had gone and a belt of heavy rain joined us again. But what privileges we had been given these three days. To quote again from Gerard Manley Hopkins in Inversnaid


"Where would the world be, once bereft
Of wet and of wildness?" 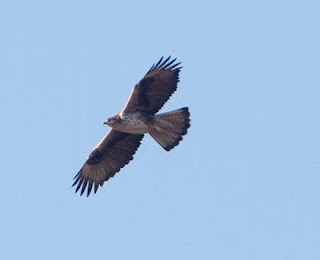