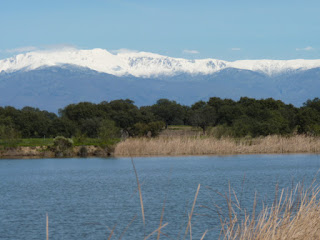 The weather in spring is always fickle, but perhaps never more so than this year. In the last week I have worn mid-winter gear, with woollen hat and gloves, on one day, gardened in shirt sleeves another, sheltered from biting winds and torrential rain and soaked-in the sunshine. After last year's drought, we have enjoyed a bumper dose of rain this year and when the sun has shone, the beauty of spring in Extremadura has been breathtaking (see my photo above of the Gredos mountains). So spring has been bouncing around a lot, throwing at us a full repertoire of weather, but steadily also ringing the seasonal changes of nature. Some of the winter visitors left dramatically and spectacularly... 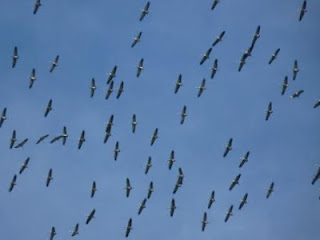 the exodus of the Common Cranes over the last few weeks marked by spiralling flocks and purposeful skeins, whilst others drift away, seemingly a few birds at a time - gradually the winter numbers of Lapwing are lessening. They are replaced by the spring migrants, some like the Barn Swallows and House Martins since January, but now each day new arrivals are seen. Today I heard my first Common Cuckoo of the year and saw early passage Yellow Wagtails, as well as one of my favourite birds, a drake and duck Garganey. A Scops Owl is now calling each evening and our Red-rumped Swallows are back, checking out the last year's nest near the kitchen door.

The rather cold weather of late may have delayed some of the flowers, but the first orchids not far from home are now in flower, such as 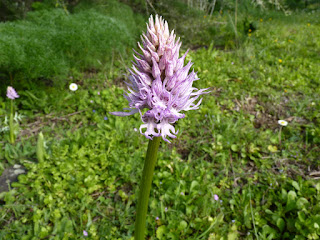 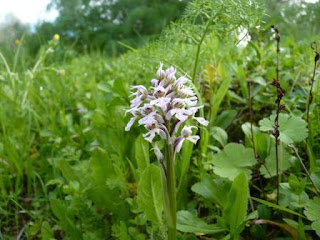 They join plants like the afternoon-flowering Barbary Nut  (Iris sisyrinchium) which has already been in flower for several weeks. 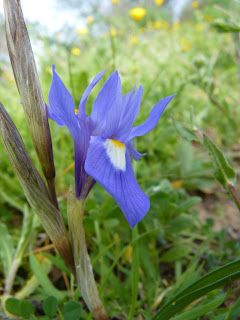 It was on one of the sunnier days this week that I accompanied four guests to the Monfragüe National Park. 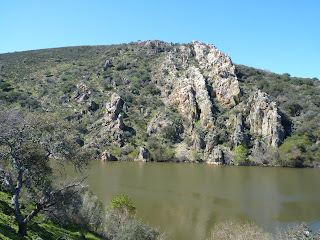 The picture shows how the river level is in the park, close to its maximum. As we stood with the snow-clad Gredos mountains as our backdrop, the barking call of the Spanish Imperial Eagle echoed across the valley. It was the female, calling from its nest site, possibly because she could see something we could not. A few minutes later she called again. Soon afterwards, the male glided into view and after circling a couple of times against the clear blue sky the sun catching the pure white leading edge of his wing, and descended rapidly to the nest, well hidden from view. 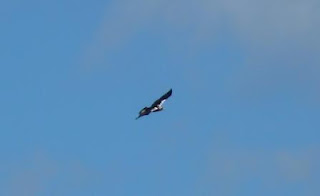 Within seconds, the female, larger in size and with slightly less uniform dark plumage (probably because she is slightly younger than her mate) took off and disappeared in same direction that the male had come from. We did not have long to wait until she came back, and then granted us a long view as she sat on the cliff and preened, carefully "zipping" each of her flight feathers in turn. Rested and her plumage in shape, she returned to the nest, and the male headed off, making a couple of mobbing dives at Griffon Vultures, before departing. Elated with our good fortune, we could hardly have believed what awaited us at our next stop.

One of the group was especially keen to see Bonelli's Eagle and despite spending time earlier during the day at some good vantage points, the species had eluded us. It was now four in the afternoon: not much time left. We walked beside the River Tajo, close to the wonderfully extensive mixed Mediterranean woodland that is a feature of Monfragüe. A Short-toed Eagle drifted over and soon afterwards a Sparrowhawk set off on its late afternoon hunt. Suddenly, at last, a raptor glided in from the south, quite high up, but the sun catching the pale body, contrasting with the dark underwing. It was a Bonelli's Eagle and with good fortune shining on us, the bird turned and started to circle in a perfect position for us to watch it. It was soon not alone however. because a fawn-coloured juvenile joined it. The younger birds was an intruder and soon the two birds were mobbing each other. The adult was the joined by its mate, the larger female. The youngster was no match to the combined forces of the established pair and we watched spellbound as a "dogfight" ensued above our heads. Sometimes the three eagles were close together, sometimes the adults moved off and then returned to dive-bomb the juvenile. Eventually, their strength and experience proved superior and the younger bird moved off. The adults glided off in the same direction, now without the urgency of pursuit. It was one of those golden moments, the climax of yet another memorable day here.