Showing posts from September, 2012
Show All

So flows the river 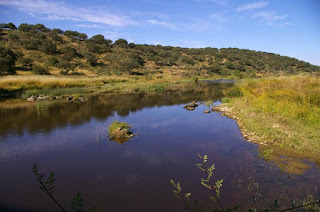 I suppose my fascination with rivers started as a small boy, thanks to the proximity to home of a small tributary of the Thames, the River Roding. So close infact, that by scrambling through a hole that I had made in the hedge at the bottom of the garden, I could emerge beside a muddy bank and onto a little path that followed the meandering river upstream. We lived in the small village of Abridge in Essex, just 20 kilometres from Hyde Park in London, on two London Transport bus routes and close to the Central Line of the Underground, but still the village felt part of rural Essex. The very name Abridge, drew attention to its relationship, our relationship, to the river. From the house we could look over water meadows which once or twice in the winter would flood. Waking up we would look across a vast shallow lake, with dozens of Black-headed Gulls apparently aimlessly drifting about as they swam on the surface. But it was the river which was the magnet for me. A place for me to wan
Post a Comment
Read more
More posts