Showing posts from December, 2018
Show All

The evening of the day

A winter's evening at Arrocampo Reservoir (Martin Kelsey) At a quarter to six the action starts, flagged by the arrival of a band of forty Cattle Egrets, pushed by a sense of purpose and giving their craggy calls as they pass. A guttural wrenching call incongrously emergences from the elegance of a Little Egret. Why is it that a family of birds so suave that demand for their nuptual plumes decimated their populations over a hundred years ago, are the authors of such coarse squawks? My musing is quickly overtaken by the next ribbon of dusk activity as I count over two hundred Jackdaws, lining-up and all facing the same direction along high-tension cables. These are suspended from pylons that cut a tangent along the eastern fringe of the Arrocampo Reservoir. Unlike other reservoirs, the water level of Arrocampo barely fluctuates during the year. It acts as the source of coolant water for the Almaráz nuclear power plant, the white domes of which I can see across to my left. Th
3 comments
Read more

Farewell to the Tree of Love 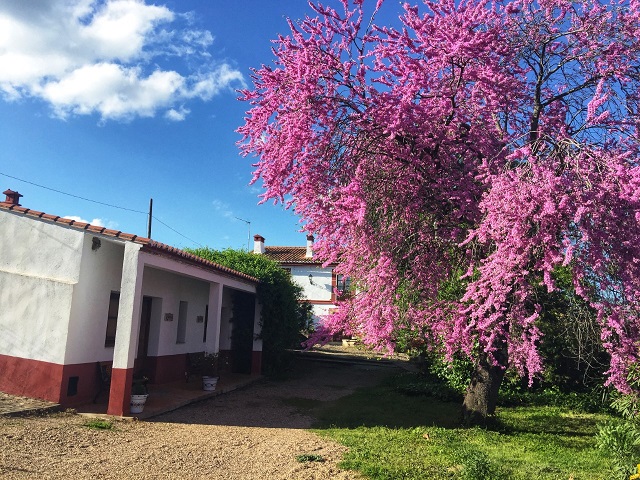 Our Judas Tree in flower (Claudia Kelsey) Standing on the eastern side of our drive, with the house as a backdrop, the Judas Tree Cercis siliquastrum bestowed a breathtaking performance each spring. From its bare and twisted twigs buds erupted into candyfloss-pink pea-like flowers. The blossoming tree drew admiration and from afar became a beacon, networking as it were, with other Judas Trees that had been planted beside the old houses, that like ours, had been small wineries ( Lagares ) on the hill which became thus named, the Sierra de los Lagares. For the ten-days or so of the flowering period, this visual spectacle was also audible. Standing close to tree, with my eyes shut, I would be wholly enveloped by the warmth of the sound of thousands of honey bees and carpenter bees, feeding well into the spring evening on the nectar it gifted them. It was like an embrace of sheer life and vitality. As the flowers dropped and carpeted the ground below the tree, forming rosy drifts o
3 comments
Read more
More posts