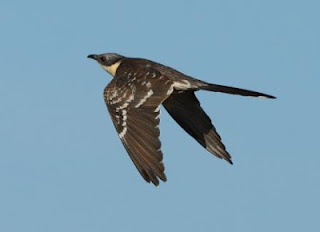 We saw the New Year in with our guests from England and Germany, and with the morning of New Year's Day being rather misty and dull, the day was spent tidying-up, doing some paperwork and preparing that evening's dinner. A few minutes in the garden did produce one of my favourite birds, a fine Hawfinch, as well as Spanish Sparrow, Spotless Starling and Azure-winged Magpies as a kick-off to 2013. So it was with great anticipation that I set out on the 2nd January to share the joys of birding on the plains nearby with our guests Anne and Keith Honnor. As is usual in winter with calm, clear weather after some damp days, we quickly encountered a thick bank of fog, precisely at my intended first stop. Despite the almost zero visibility we could just about make out dozens of small birds feeding on the pasture beside us: Skylarks, Rock Sparrows, Meadow Pipits and White Wagtails. A Green Sandpiper appeared momentarily in the mist above us, giving its strident call, which often finds its way incorporated into the song repertoire of that superb mimic, the Calandra Lark. As it would prove later on, the fog at that stop was fortuitous since it encouraged me to make a mental note of returning there later in the day.

We then headed to the other side of Trujillo, where as is also usual in winter, we found clear skies and sunshine, the fog banks often being localised and patchy.  Here we found three very distant Little Bustard feeding in a field. Something caused them to fly and it was a delight to see them settle in another field, right beside the road. We carefully approached and had good views of them,. Atop a patch of high ground, in glorious sunshine had gathered a party of 14 Great Bustards. A splendid male Hen Harrier quartered an area of granite outcrops, scattered bushes and stone walls, keeping very low to the ground.

It was time to move on and we stopped for lunch at a site where the plains extended in all directions, rimmed by sierras. The landscape was an emerald green, with masses of yellow crucifers in flower. The mist had dispersed and we felt it getting gently warmer as the sun strengthened. There were even two butterflies on the wing (2nd January!), a Clouded Yellow and a Western Dappled White. We had planned a walk after lunch, but instead spent the following two hours simply standing and enjoying the birds as they came to us. A large group of Pin-tailed Sandgrouse were feeding several fields away, periodically rising as a noisy flock , wheeling high and gliding down again. A delightful Little Bustard was pecking at the crucifer flowers nearby, whilst parties of vultures had found the first thermals of the day. As we watched, I caught a glimpse of an eagle, flying low in our direction, the sun catching the white leading edge to the wing: an adult Spanish Imperial Eagle. It glided up to perch in a clump of eucalyptus trees where it rested and preened in superb light, before taking off and flying past, just seconds before an adult Golden Eagle also made an appearance, soaring just to the other side of us.

The sun was getting lower and I was keen to get back to the area where we had stopped first whilst we had sufficient light. We arrived there , with clear skies still, although to the south one could see that in that region the fog had not lifted all day. A group of about twenty Great Bustards looked resplendent in the winter sunshine. Close by a bushy-coated fox walked along a fence-line, right below a Raven that sat on a post. The fox stopped and they looked at each other for a few seconds before he continued his stroll. About fifty Black-bellied Sandgrouse, in two parties, fed at close range and perfect light, providing extraordinarily good views. And then, as switched our gaze between sandgrouse and bustrards, we spotted the icing-on-the-cake: a Great Spotted Cuckoo flying past. It was the earliest I had even seen one here (my previous earliest was 6th January in 2008 - it is one of the first spring migrants to return): a wonderful surprise for what had been a really satisfying day in the field. It pressed home a key message too about birding: just how rewarding it can be to sit (or stand) and wait. Most of our birding time that day had been spent at just two spots and we had seen more than we could have hoped for.

The photo above of a Great Spotted Cuckoo was taken last spring by Raymond de Smte: one of his favourite birds.