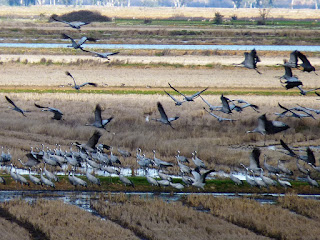 Winter here in Extremadura is about sheer numbers of birds, with always the possibility of surprises to spice the cake. Final figures are not yet in, but results so far show that with over 100,000 Common Cranes counted in Extremadura this winter, it is a record year for this species here. The picture above, taken by my twelve-year old son Patrick, shows a fraction of the birds viewable from the observation tower at Moheda Alta, about half an hour from our home and one of my favourite places to spend a winter afternoon. Along with the cranes, there were hundreds of Grey Lag Geese, part of the Norwegian breeding population and we were delighted to watch amongst the cranes, a couple of hundred Pintail, vanguard of the late-winter surge to Extremadura as thousands of this most supremely elegant of ducks arrive from winter quarters in West Africa en route to northern Europe. The afternoon light caught the rich cream-coloured breasts of the drakes (never really given justice to in field guide illustrations) as they meandered between the legs of the cranes in the flooded rice field. 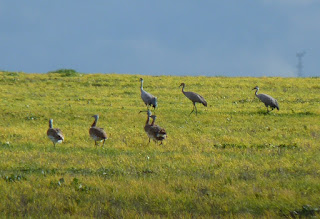 Not far from Moheda Alta, there is an area of what used to be rolling dry-country steppe-like habitat, mainly arable, which has over the years been slowly converted to a mixture of flooded fields for rice, irrigated land for tomatoes, maize and olives with remaining tracts of rain-fed cereals, like wheat. Despite being intensively cultivated land, quite different from the extensive more traditional mixed farming on the plains closer to our home, it is an extraordinary rich area for birds, and especially productive in the winter. There is varied land-use, so there is no monoculture, creating a mosaic of feeding areas for birds, stubble fields that are left to rest over winter, ditches and uncultivated field corners. Whatever the reasons, the birding here is magnificent. As I entered late one afternoon, a flock of 80 Great Bustards were on the move, flying from one field to another nearby. Great Bustards and Common Cranes strode together in a field full of yellow wild crucifers (see above). Parties of Black-bellied Sandgrouse settled, a Merlin dashed after Meadow Pipits, whilst a few minutes later 40 Little Bustards came in to join their larger cousins. In some rice fields, the crop had not been harvested and vast swarms of Spanish Sparrows settled, darkening the surface of that part of the field, before rising in a tight and twisting flock, up and sideways, loose and then compact before settling again. Some landed on a pile of peach tree prunings nearby, providing foliage, as it were, to these bare, dead twigs. 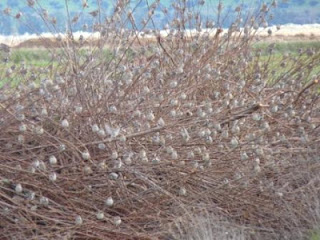 In the three years up to 2010, I took part in the national Winter Bird Atlas and in 105 hours of observation in  a good cross-section of Extremaduran habitats (mountains and woodland, as well as plains and rice-fields), Spanish Sparrows were the most numerous of the species encountered, with 5070 individuals counted. On the rice fields one can also find House Sparrows and Tree Sparrows, but they are always outnumbered.

The reason for my evening visit was to watch this field of unharvested rice, but the Spanish Sparrows were actually the warm-up, the supporting act. Almost as in a theatre, with this field as the stage, as light fell, so drifted in the dark forms of Marsh Harriers, having spent the day hunting the fields and ditches.. Some landed in adjacent fields first, on fallow or more open maize stubble, the nearby pre-roost sites. In one field over a dozen birds sat and waited. Once the sun had set, in the dusk, the harriers became airbourne again, quartering the fields as they approached the rice crop. Then they hung momentarily above the rice, some twenty birds at one point together before they gently dropped into the rice. There remarkably they disappeared completely, dropping to be immersed completely in the grey-yellow rice stems, as if snuggling down for the night, completely out of view. Perhaps seventy Marsh Harriers, probably more, vanishing into the rice, which cannot have been more than 30 cm high.  I stood, waiting in anticipation for a special guest, topping the bill on this evening's show. Darker still and four or five Hen Harriers had also arrived, likewise disappearing into the rice. I watched the smart males with their black, dove grey and white plumage, the wing tipped boldly back and a black training edge visible on the underwing. As I was watching these, another, even paler bird appeared, in view for barely a couple of seconds before it stopped to rest in the neighbouring grassy field. I could only see its head and wondered, rather anxiously, whether it might decide to stay put there and not fly into the rice. I need not have worried. As I watched, my attention fixed to it like glue, it took off, turned and then paused over the rice before descending. It was much whiter than the Hen Harrier, no dark trailing edge on the underwing, and as it turned, the wing showed the distinctive narrow wedge-shaped black wing tip. It was a male Pallid Harrier, a very rare bird in Spain, and like all stars it did an encore, taking off from the rice to do a final turn to show-off all of its features before dropping, this time for good, deep into the rice.

Pallid Harriers, birds of the Central Asian steppes, may be on the move westwards as a result of agricultural changes possibly giving cause for the increase in the winter and passage records in western Europe. I would not be surprised to have further sightings of the species here in Extremadura in the future.

The show had ended, indeed the Pallid Harrier appeared to have been the last of all to enter the roost. The crop stood still, impossible to tell now that it held dozens of roosting harriers. As I turned in wonder and contentment back to car, a Black-winged Kite took off from the old road sign beside my vehicle. It was barely light enough to see anything as it glided with stiff wings and then hovered over the ditch beside the now empty stage.