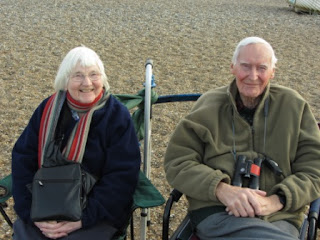 This is a particularly personal blog entry to record my gratitude and appreciation to my father who passed away on 27th January 2013.

All of us have had mentors and role models. I have always been fascinated in birds and throughout my life there have been individuals at key moments who encouraged, supported and inspired in many and sometimes very different ways. But the greatest influence of all was my father Derek Kelsey (he never used his first name Francis), who started my interest in birdwatching in the early 1960s, sowing the seeds of what started as a hobby and then became my life.

At the age of five I walked with him beside the River Roding in Essex and I still have my notebook which lists the birds that we saw on that morning, some written in clear capital letters for me by Dad, others written by me using letters of all sizes, their names leaving the page at different angles. In those early years, he taught me how to tell apart Willow Warblers and Chiffchaffs by song, and – a tricky pair – how to separate the songs of Blackcap and Garden Warbler. These simple experiences somehow implanted in me the capacity to pick-up and store in my memory a vast repertoire of bird songs and calls, a vital skill which I owe to him.

There was the hallowed institution of the Early Morning Walk. In the 1960s, when we lived in south Essex, those unforgettable pre-breakfast walks in the spring, to small copses and plantations, where we found Grasshopper Warblers, or looking out across salt marshes in North Germany and then cycling back at a furious pace to avoid arriving late for our holiday breakfast. In South Wales in the 1970s, we decided to spend a midsummer night sleeping on the summit of the Sugar Loaf mountain near Abergavenny, under the stars. At dawn we were shrouded in cold mist and tiny drops of dew decorated my Dad’s hair and eyebrows. As we descended through the oak woods of St. Mary’s Vale we were surrounded by the song of Pied Flycatchers, Redstarts, Wood Warblers and Tree Pipits. It was like the dawn of time.


These were the days before modern telescopes for birding and my Dad had an old cumbersome brass telescope, which you could only use by finding a fencepost or someone’s shoulder to support it on – unless a convenient bank enabled one to sit down, lie-back, cross-legged with the telescope balanced at the corner between one’s foot and shin. However a birding pal of ours in Germany used massive maritime binoculars and my Dad acquired a pair of these 20 x 80 monsters and subsequently a huge and incredibly heavy metal tripod, reminiscent of those used by surveyors. It was hell to carry and the binoculars were secured on a custom-built mount with six fiddly screws. But once in-situ it was actually quite an effective instrument, especially for the wildfowl counts that my Dad led each month during the winters in the 1970s at Llandegfedd Reservoir in Gwent, scanning through the rafts of duck, counting each one, using a hand-held mini-tape recorder or calling out the figures for me or one of my brothers to write down. Dad continued his waterfowl and wader counts at Cley Marshes reserve in the 1980s on his retirement following my parents’ move to North Norfolk. Indeed he was dedicated to taking part in bird surveys, another activity that gives me great satisfaction today.

In his final years, he was greatly limited in his mobility and it was in late August last year that Patrick and I took him in his wheelchair on his last visit onto the reserve at Cley. The picture above, taken by my sister Katrina, shows Mum and Dad on the beach at Cley in March 2012. I sat beside him during his final days in January 2013, his sight was dimming and he could hardly speak. Two days before he died, it was a cold morning and snow lay on the ground, and from my chair at his bedside I could see the holly tree beside the house and as I told him that it was being visited by a Fieldfare, whilst a Brambling sat on a twig nearby, he slowly smiled and nodded.

Thank you Dad, my love of birds has shaped my life and it was a gift from you.

Anonymous said…
Sorry to hear of your sad loss. I was moved reading your tribute to your father.My father, who is now 90, though not a birdwatcher as such , has a great love for the outdoors,particularly the coast,woods and wild moors and valleys of Northumberland,where like yourself,he introduced me as a 7 year old to the great outdoors and its birdlife and started a 50 year love affair with the county and it's birds. Taking me out there whenever possible, and on fabulous holidays to the west of Scotland. I,like you owe this passion to my dad.
kind regards,Alan J.
30 January 2013 at 12:49

Tinúviel said…
I'd like to offer you my condolences on the loss of your father. I was moved as well by your beautiful, heartfelt tribute to him; I am sure that he was, and continues to be, as proud as anyone can be of having such an extraordinary son as you are.
30 January 2013 at 14:57

Unknown said…
So sorry to hear your sad news Martin; we would like to offer our sincere condolences.
A very moving tribute and how lovely to think he could still appreciate his birds in the final days.
Kind regards, Tony and Pam Perry
2 February 2013 at 15:01

Martin Kelsey at Birding Extremadura said…
Thank you for your kind comments, they are very much appreciated.
12 February 2013 at 09:14

Unknown said…
It was only last week that I saw your blog. I remember the wildfowl counts because I attended them, getting a lift in the Kelsey Volkswagen campervan. I remember the huge binoculars and my freezing feet. There were also early morning visits to St. Mary's Vale in the spring, the meetings in Goytre and several other places where birds were on the agenda. I still enjoy birdwatching but miles below the Kelsey level of expertise. I was in the same year as Gavin in school in Abergavenny.
Best wishes Stephen Brown
10 December 2018 at 08:58

Martin Kelsey at Birding Extremadura said…
Thank you Stephen for your comment. I will show Gavin what you have written. Best wishes, Martin
18 December 2018 at 12:23

Royal visitors at the northern limits

A Fieldfare "the Royal Thrush" (Martin Kelsey) There are moments and places in Extremadura which take me far from the familiar  dehesas , plains and Mediterranean scrublands close to home. Indeed, one of the profound attractions of Extremadura's landscape diversity is quite simply that. I do not need to travel a long way for fresh encounters. Yesterday through winter banks of fog I headed north to the very limits of the region. Just shy of the border with Castille y Leon, I took a narrow winding mountain road through the village of La Garganta, whose population of about 400 people live at an altitude of over 1100 metres, the second highest settlement in Extremadura. Many of the inhabitants work higher still, as my route ascended I passed smallholdings and mountain meadows, patches of forestry land, a goatherd with his animals. The view to the west (Martin Kelsey) Now well above the fog, I had a view westwards across the mountains of Las Hurdes and Gata, as far a
Read more

Great Cormorants passing high over the house (Martin Kelsey) From the balcony (again...) I notice a small skein of slender, dark birds appearing from the south-west, high above the ridge-top. I position myself better and watch them pass, continuing on a clean north-east trajectory. They are a dozen Great Cormorant. Their determined passage, in that direction, in formation and at that height suggests migration. Great Cormorants have been nesting at some reservoirs in Extremadura since 2002 (there was an isolated breeding record in the 1990s) and they now nest at Alcollarín Reservoir just 15 km away. They are, however, a very common winter visitor and one can find them not just on reservoirs and along large rivers in considerable numbers (sometimes in flocks of several hundred strong) but also encounter individuals on small ponds out on the plains or along smaller seasonal rivers in deep-set valleys. They are a species I have seen a couple of times from the house over the span of
Read more