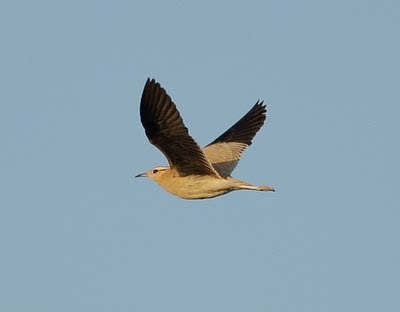 September is always a fascinating month with the equinox, the change of season. The month started with some deceptively cool and wet weather but soon reverted to the final blast of summer with very hot and sunny conditions. Now in its final days, the month is slowly recalibrating to autumn - the sky is still a brilliant blue, but there is a refreshing chill at dawn, the nights are getting longer. The changes are marked by the wildlife as well, a month that starts with the skies full of Bee-eaters. As their arrival in spring, so their departure, the Bee-eaters seem to get higher and higher, just passing over, eventually revealing their presence just by their whistled "prrruit", like old-fashioned referee's whistles. It is a time too for surprises, as one never knows what migration wil bring.

Just this week, two Belgium birders staying with us had the amazing good fortune to be at the right place at the right time. Standing out on the nearby Belén plains early in the morning, whilst looking for Great Bustards, they saw an odd-looking bird fly over. Equipped with a fine camera and lens, Raymond De Smet had presence of mind to take a series of photos as the bird passed. One of them is at the top of this posting - it shows a Cream-coloured Courser, a desert species from North Africa and only the second time ever it had been seen in Extremadura (there was one seen twenty years ago). They didn't manage to see where it landed because at that moment they were distracted by a Wild Boar which approached closely. That in itself would have been a highlight of the day!

The following morning, and the morning after that, I too was out on the Belén Plains, with Kevin and Catherine from North Wales. The Cream-coloured Courser is a sandy-coloured bird, which more or less describes the colour at the moment of kilometres and kilometres of suitable habitat on the open plains here...talk about a needle in a haystack! Well we never refound the Courser (it may well have left the area completely by the time we were there)and nor did others out looking for it as well, but it was really special to be out on the plains at first light, watching Stone Curlew, Great Bustards, my first Hen Harrier of the autumn and on the second morning three of our rather grey-looking foxes (see John Hawkin's photo here)romping around at play. 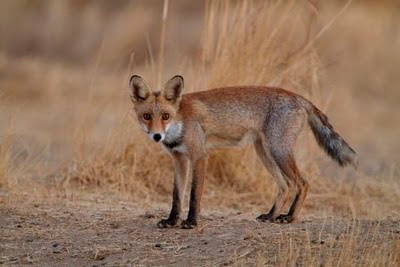 Still there are other surprises. Earlier in the month, I was out at dawn on the plains and from the car settled down to watch three Great Bustards close by. As I watched I saw something I had never seen before. Two of the bustards were juveniles, albeit practically fully grown. The adult bird, a female was pecking at the top of dead thistles. It picked off an item of food (perhaps an insect or a thistle seed) and immediately one of the younger birds ran up and pecked the food from its mother's bill. The adult found another item of food, held her bill still and again the juvenile came forward to take it. I had always assumed that bustard chicks, being precocious (like chickens) find food for themselves as soon as they hatch, and indeed according to the literature they do, although the hen will sometimes pick up food for them when they are small. What surprised me was that such large juveniles were still receiving from the adult. It just demonstrated that you never know when you will seen something new and unexpected, it is a question of observation and curiousity. It may have lacked the excitment of a rarity like the Courser, but there was a thrill at witnessing something new, another insight into the life and behaviour of such emblematic birds.
Bee-eaters Cream-coloured Courser Extremadura Great Bustard Hen Harrier Red Fox Stone Curlew