Changes on the rice fields 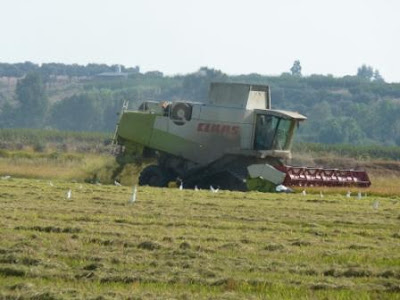 What a difference a few weeks can make! I spent several hours at the start of the month driving around through areas of rice production and frankly not seeing very much in the way of birds. The crop had not been harvested, although it was starting to turn yellow, so the paddies were densely covered by rice, making it very hard for anything other than White Storks and egrets to reach the water and find delicacies such as crayfish and frogs. Over the past few days however, I have been back. In some of the areas over 50% of the crop has been harvested and the big combines with their caterpillar tracks will be harvesting the rest right through October and even into early November.

Extremadura is one of the top rice-producing areas in Spain and the area of rice production has increased significantly since the 1970s. Far from the coast and with low rainfall (although average rainfall in Extremadura is higher than eastern England), intuitively it does not appear to be the most logical place for such a crop. However, thanks to a massive infrastructure of reservoirs (even though it is land-locked, Extremadura has more "coastline" than other region of Spain - because of the numerous artificial water bodies, as well as large rivers crossing the territory), canels and pipelines, water is moved from storage onto the flat valleys of the Guadiana river and its tributaries in central Extremadura. When conditions have been favourable for the rice-producers and subsidies available, paddies have even been built on terraces, rising on slopes to encroach what was steppe country or dehesa woodland.

It is a classic dilemma for the conservationist. Certainly areas of habitat supporting communities of very special animals and plants have been lost under this intensive agriculture. However, the ricefields have created a new wetland habitat in Extremadura which not only has added considerably to biological diversity, it is now considered to be of international conservation importance. The wet paddies provide wonderful habitat for migrating waders - they are an important stopover for birds like Black-tailed Godwit, as well as being used by tens of thousands of wintering Common Crane and waterfowl. 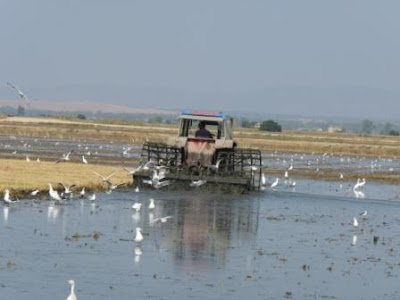 The farming operations underway at the moment are creating, inadvertedly, the right conditions for these birds. Many of the paddies are left as stubble after harvest. These are the fields where the cranes, geese and duck will be feeding in a few weeks time. Other fields are quickly "ploughed" by tractors using iron frames instead of back wheels. Hundreds of gulls and egrets follow the plough, and indeed today I saw dozens of Yellow Wagtails doing the same. These are the fields that will be visited by waders, through autumn, winter and early spring. In one field I watched today there were over 95 Common Snipe and about 50 Spotted Redshank, as well as small numbers of other waders. The same field two days ago had over 120 Ruff. Overall in two fields I found 16 species of wader, including small parties of Little Stint busy feeding together in glorious autumn sunshine. The ditches between the paddies are superb for wintering Bluethroats. Overall it is one of the best areas to enjoy a winter's birding anywhere in Europe.

The irony now is that there is concern from some conservationists over the possibility that rice production might decline as a result of changes in European agricultural policy. The rice fields in Extremadura are productive both in terms of growing food, as well as creating a habitat which is being exploited by different birds throughout the year. I would not necessarily wish any more dry open country or woodland to be converted to irrigated and flooded land, but I do hope efforts are made to maintain what we have.
Black-tailed Godwit Bluethroat Common Crane Duck Extremadura Geese Rice Waders Yellow Wagtail

Unknown said…
Hello here i have seen your post which is nice to see here, keep doing well and you have done good work on this post...hoverboard maintenance | Self Balancing Scooter Price
29 August 2016 at 13:38