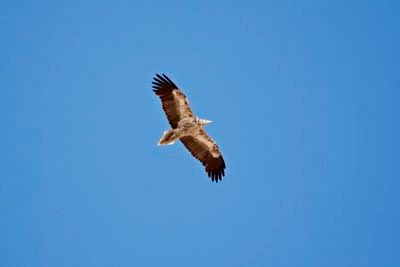 The start of September and the season is turning. Although it is still hot during the day, the dew lies thick on the lawn at dawn and there is a freshness to the sky. The epitome of passage here, a Willow Warbler, is busy feeding in the shrubs. It is a time for late summer chores and for a few hours each morning this week, I have been chopping off the tall shoots that have grown at the base of the olive trees. This leaves the base of the trunk nice and clean which makes laying down the net for harvesting the olives during the winter a much easier endeavour. It probably also ensures that tree pushes its resources into the olives themselves, or so folk will say. They are certainly fattening up, helped a lot by a couple of heavy rain storms late last week. As far as birding is concerned, this is the time for passage migrants and in many respects I may as well be spending the time in the garden as any where else. Indeed, I spent a fruitless morning last week in the rice growing area, looking for muddy fields which would attract waders, but all had dense rice crops, maize or tomatoes. Even a pool which usually has been a wonderful spot in September was almost dry this year. My compensation was seeing dozens of Lesser Kestrels on the wires crossing the open plains - perhaps some were local birds, but I suspect that many had come from further afield.

No, the garden is the place to be...looking up between olive trees I watched two Black Stork circling above whilst minutes later a fine adult Egyptian Vulture drifted over, followed shortly afterwards by another. I have seen a female Montagu's Harrier and sometimes there have been three Booted Eagles and a couple of Short-toed Eagles in the sky together. Like the Lesser Kestrels, are they local birds or passage migrants? Noisy parties of Bee-eaters are also passing over, as are groups of Alpine Swift. It is a fascinating time of year. I have just finished reading David Lindo's book on the Urban Birder, where he shares the advice to look-up - whether in town or country, or in my case this week the garden..otherwise you have no idea what you are missing!
Alpine Swift autumn passage Bee-eaters Black Stork Egyptian Vulture Extremadura Lesser Kestrels Short-toed Eagle Willow Warbler