Moving the firewood and other autumn tales 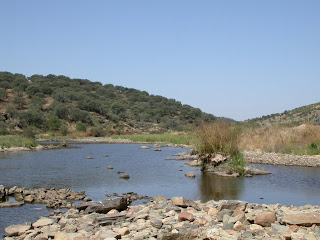 Some absolutely superb autumn days with the air crystal clear and without a cloud in the sky. A very good time to move the four tons of encina (holm oak) wood that we bought in the spring and had been soaking up the sun during the summer to covered storage, in advance of autumn rains. There is no shortage of firewood here. Much of this part of Extermadura is covered by the characteristic open grazing woodland, called dehesa. Each of the millions of holm oak trees that dominate this landscape is pruned every ten to fifteen years, with boughs and branches sawn off to open the canopy and to encourage a more horizontal growth. This provides more shade for the animals, keeps the tree short enough to manage easily, will encourage fresh growth and more acorns, as well as yielding huge amounts of wood for firewood and charcoal production. Four tons is enough to last us two winters, but we did a deal with Fernando the neighbour, so that this year he will take half.

So a couple of mornings ago, Fernando and I were joined by another neighbour, Geoff (who hails from the Midlands, but now lives in the village and is known locally as Paco – because no one can pronounce his real name) and his son-in-law Dai. Loading up the back of Paco’s van we moved two tons to Fernando’s yard and then two tons to the entrance of our firewood shed. The whole operation took 90 minutes. Fernando then invited us over for refreshments: cold beers, local goat’s cheese, home-made chorizo sausage and local tomatoes. The refreshments took a further 45 minutes – which I feel is a fair distribution of time! I now have this winter’s firewood wonderfully dry and well protected.

As well as that, I have been taking guests out into the field. On one day this week to the Monfragüe National Park where we had glorious views of an adult Bonelli’s Eagle against a clear blue sky, as well as two White-rumped Swift, Egygtian Vulture, Short-toed Eagle and Black Stork – remaining summer migrants. The transition from summer and autumn was well evident with some juvenile Griffon Vultures still being fed at the nest, whilst Red Deer stags were rutting. Myths that pigs do not swim were well put to rest by the fine sight of a female Wild Boar and two piglets swimming the width of the Tajo river.

On another day we visited the plains to the west of Trujillo. Highlights included an adult Golden Eagle, several Great Bustard and a flock of over 30 Black-bellied Sandgrouse, a Black Wheatear in a rocky river valley, but most memorable was the sheer abundance of passage migrants: Northern Wheatear, Whinchat, Willow Warbler, Pied Flycatcher and some male Common Redstarts as almost constant companions on the roadside fences as we followed our route through the day. It really has been an amazing autumn for these migrants.
autumn Black Stork Black Wheatear Black-bellied Sandgrouse Bonelli's Eagle Egyptian Vulture Golden Eagle Short-toed Eagle White-rumped Swift