Is summer coming to an end? 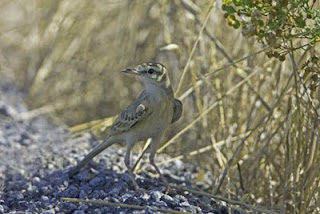 Coming back after ten days away, the heat that has been such a feature of this long summer still persisted. Whilst I had been away, there had been a fire at the entrance of the village, spreading across several fields on both sides of the main road, encircling a house and the tiny village cementery. The herbaceous vegetation will quickly recover, but I wonder how the trees that were affected will fare. Time will tell. The countryside is a tinderbox and in a way it is surprising that fires are not more common. Most people here take great care.

Just the last couple of days, we have had a couple of thunderstorms and there is a slight freshness in the morning, signalling perhaps that the edge is coming off the heat and autumn will be arriving. It is overdue.

Birdwise, autumn passage is at full strength here. Out on the plains, semi-deserts now, there are many Northern Wheatears and Whinchats, plus a few Tawny Pipits. When I was out there three mornings ago, I came across Willow Warblers as well, hopping on the ground amongst the withered and sparse vegetation. Great Bustards stalked the lanscape, bills agape panting, whilst Black-bellied and Pin-tailed Sandgrouse came to drink to water in a deeply-escavated dew-pond nearby. Later that day I went to the Monfragüe National Park, in the middle of the day Red Deer and Wild Boar were coming to the river to wade belly-deep and to drink. One invariably stops first at the iconic cliff of Peña Falcón, where always Griffon Vultures will be present. A Short-toed Eagle spent the entire duration of my visit perched on a rock close-by whilst I was pleased to find a Black Wheatear right at the top of the cliff opposite. This rock-loving species can be found quite readily at a number of sites near us, but in all these years, I have seen it at Peña Falcón less than half a dozen times.

The wooded habitat in the park was providing feeding grounds for Common Redstart, Pied and Spotted Flycatchers: all on passage.

Back at Monfragüe today, no sign of the Black Wheatear at Peña Falcón, but a delightful party of a dozen White-rumped Swifts. This is the largest group I have seen there of this rare (but probably unrecorded) swift which nests in disused Red-rumped Swallow nests. It is one of the last summer breeding species to arrive in Extremadura (usually in second week of May) but can still be seen into October. We had fine views of all three vulture species and at the northern viewpoint of Portilla del Tiétar, three Black Stork circled just above us. There I had another surprise, a juvenile Purple Heron flying past - the first I had seen in Monfragüe National Park and quite out-of-place to see in a rocky river valley. But that is migration, things pass through and can turn up where you least expect them sometimes, which is what makes birding at this time of year so rewarding.
autumn passage Black Wheatear Common Redstart Monfragüe Pied Flycatcher Purple Heron Short-toed Eagle Spotted Flycatcher Tawny Pipit