Evening at the rice fields 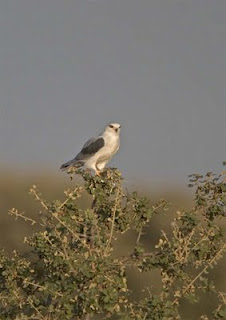 Well autumn has come and we are enjoying a significant drop in temperature, fresher westerly breezes and showers of rain. Yesterday I headed out to the rice fields with our friend John Hawkins. He and his wife, Anthea, have a holiday home close to Trujillo. John is an excellent photographer and many of his bird photos grace themselves on our website and blog. We made our visit in the late afternoon, which even just a few days ago would have been considered an unproductive time because of the heat. Yesterday, it was just perfect with a glorious evening light bathing the paddies and the cleanness of the air ensuring that we had superb views of the Villuercas mountains as a back drop.

The pool that I regularly check was very low, and doubtless because of the concentration of fish in the shallows, had attracted several anglers. At first glance it appeared almost bird-less, but as we checked the edges of the remaining flashes of water we picked up a nice variety of waders, no great numbers (almost everything in single figures) but a total of 13 species, including Temminck’s Stint, Little Stint and Wood Sandpiper. A couple of Spoonbills flew in to settle there as we watched, whilst over the bank hovered a Black-winged Kite. Beyond, over the rice fields flock of 13 Glossy Ibis circled round. This is species invariably turns up here in September, often in double figures, presumably on passage or dispersal, perhaps from the Coto Doñana? We do not know for sure.

There were Willow Warblers seemingly everywhere, and good numbers too of Pied and Spotted Flycatcher, as well as Whinchat. A pale-phase Booted Eagle circled overhead, whilst a ringtail and a juvenile Montagu’s Harrier quartered the fields. As we left, a nice group of Yellow Wagtails and two Wood Sandpipers foraged together in a damp field, and about twenty Little Bustard gathered around broken straw bales on a dry sheep pasture. Further along, a group of ten Great Bustard had started to feed in a stubble field. The sun was setting and parties of White Storks drifted to their autumn roosts at the same time as Black-headed and Lesser Black-backed Gulls were on a bee-line for the Sierra Brava reservoir.
autumn passage Black-winged Kite Booted Eagle Glossy Ibis Little Stint Montagu's Harrier rice fields Temminck's Stint Waders