The value of the path well-trodden 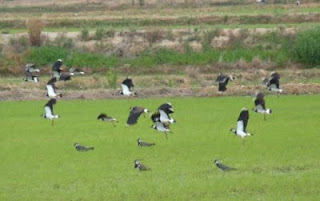 One of the pleasures of the field work involved over the three years surveying for the winter birds' atlas in Extremadura was that it took me, on foot, well off the beaten track, into areas that I had not explored before:  remote valleys and mountain tops, woodlands and farmland. But however exciting venturing into new terrain is, there is an undoubted pleasure too in getting to know particular areas so well, that they become, in birding parlance, one's local patch. Having a local patch is how most birdwatchers start and many will continue to visit a favourite haunt month-in, month-out throughout the year, for many years. Such is most of my birding in fact here in Extremadura. When I am taking out visitors, showing them our local birds, most of the routes I use will include places that I regularly visit throughout the year, whether I am working as a guide, or simply out for a few hours of birding on my own.

The value of these well-trodden paths is the intimate knowledge that is built-up over the years and seasons, a sixth-sense sometimes of particular spots to check, particular fields or shrubs, pools or copses that almost magically attract birds. They provide too one's sense of reference or benchmarks, both to the passing of the seasons, and also to the vagaries of changing populations. One feels different being an explorer in new terrain, compared to becoming absorbed, as it were, in surroundings which have become familar. And it is because of the familiarity of the surroundings that the sense of satisfaction of making a discovery, finding something out of the ordinary, is always greater when it happens on one's own home patch.  And so it happened this year, during a remarkable two weeks from the start of June, a time considered by most as one of the quietest times in Spain for finding something unusual. Let me share with you three moments.

On 9th June, I was taking out Don and Jane across one of my favourite drives across the rice fields, a route I do at least once a month, and sometimes every week, throughout the year. Despite June being thought of as quiet, it is the start of the major turning point during the year, when we start to see the evidence of bird movements that tells us that for some birds the breeding season is over and it is time to move south. This month I start looking out for the return of Lapwings from northern Europe and will expect to have seen a few, perhaps on the dry plains, by the end of June. Nothing quite prepared me for the sight of the flock of 170 that were clustered together on a muddy paddy field (see my photo above). All were adult birds, suggesting that perhaps they were failed breeders from the north. From now on for the rest of summer. autumn and winter, Lapwings will become an increasingly common sight here. Later that day we also saw a pair of Green Sandpipers, like the Lapwings traditional early returnees from the north.

Nearby, is the Sierra Brava reservoir, an area of international importance for wintering waterfowl, and always worth a check at any time of the year. On 1st June with Andy, Clare, Dave and Jann we dropped in there when passing by to look for Black-eared Wheatear. We found none and proceeded on the rest of our route. Later in the afternoon, we were nearby again and decided to give the wheatear another go. As we approached the reservoir, we noticed a single bird swimming in the bay. It looked at first glance like a coot, but something told us to take a proper look. Doing so immediately made us realize that this was no coot, but rather a first summer male Common Scoter, with bright orange-yellow on the bill as can be seen in one of Dave's excellent photos. This was only the third record for Extremadura. As a reward for our find, as we left a pair of Black-eared Wheatears promptly appeared in view! 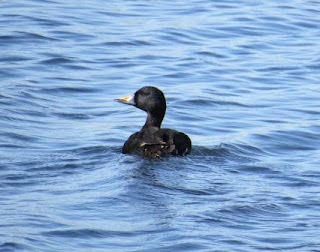 On 10th June, I again was with Don and Jane and we were driving along a very favourite track on the plains to the west of Trujillo. It was an unseasonly cool and overcast day (winter fleeces in mid-June!), the advantage of which was that we could enjoy watching the birds of the plains in good light, without heat shimmer. Ahead of me was a big concrete gate post, a feature that I subconsiously check every time I apporoach it because occasionally eagles will use it as a perch. This time there was indeed a bird there, looking very pale and strongly marked. There was something very different about it. I stopped and we looked through the windscreen. This certainly was something new, a big falcon with a very pale head and bold moustachial stripe and eye stripe. I held the camera out of the side of the car and took a photo (see below). Over the next 45 minutes we watched this bird, initially perched on the post, it then glided across the track to land on a rock in a nearby field. By the time it had gone, we had seen enough of its distinctive head pattern, evenly barred tail and pale grey-brown plumage to identify it as a sub-adult Lanner Falcon (of the North African subspecies), a national rairty for Spain. Again the value of the local, familar patch and the joy of finding something totally unexpected. Indeed along that track (of no more than a couple of kilometres) and its immediate adjacent fields I have recorded no fewer than 21 species of bird of prey over the years. There is nothing that makes that strip of habitat intrinsically different from other tracts of land in the area, yet it is the patch of open dry country that I visit and watch over more frequently than any other. Indeed the wonderful paradox of the unexpected in the familiar. 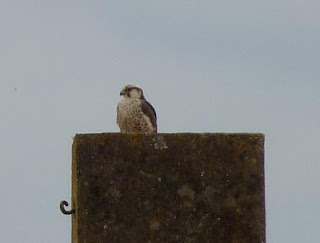