Busy herons in the peak of summer

June 30, 2013
We are now in the heart of summer...the longest day has past as has our village fiesta and the schoolchildren are on holiday. The sky is cloudless and the temperature is in the high 30s in the afternoon and will not be dropping below 20 at night. It is also the end of our main period for business, with visiting birdwatchers now very thin on the ground. We have had birders staying with us from the start of the year, right through until yesterday. When asked (frequently) when is the best time to come to watch birds in Extremadura, my answer is anytime from November through to late May - it depends what you want to see. This year we have had quite a few valient souls coming here in June as well. Normally considered a quiet time of the year for birds, this June bucked the trend somewhat with some exciting finds (see my blog of 15 June) and helped by the longer and cooler spring this year, we have enjoyed some superb birding. Over the last few days with my final tour of the season I have been showing the birds and landscapes to Sandra and Caroline. During their stay we started getting proper summer temperatures, so the pace of our days in the field adapted with the heat.Whilst most of the birds have now already finished nesting - the plains seem full at the moment of juvenile Woodchat Shrikes - one of the highlights of the tour was watching the broods of Purple Herons, Black Storks and White Storks at their respective nests. We spent a very satisfying couple of hours (and could have spent longer), watching the activity of Purple Herons (see photo above). We sat sheltered in a hide at the Arrocampo marsh, with a colony of Purple Herons before us in the reed mace. All had large chicks with their mustard-brown heads, jumping up and down on the nests, exercising their wings. Periodically adults would fly in, the young would start clamouring for food which the adult would provide by regurgitating the catch of the morning. From across the marsh the sound of the begging calls of the young Purple Herons would drown out even the song of Great Reed Warblers. Purple Herons do seem to have done well this year. I have never seen so many nesting at Arrocampo and the breeding success looks set to be excellent. We spent time watch the similar going-ons at a large White Stork colony the following day and in the Monfragüe National Park, where from one viewpoint we could see two Black Stork nests with three and two chicks respectively, we waited patiently and for long enough for an adult to make a slow and elegant gliding descent to land on a crag for a few minutes and then tracing another long arc in flight, to reach one of the nests to feed the chicks, looking delightful with their yellow-orange bills, downy white feathers and black wing feathers just sprouting through. On the other nest the chicks were a lot older, the bills now look brownish and their wing feathers well developed

These glimpses into the private lives of these birds were special moments and more than made up for the much harder work required finding birds on the now parched plains. Just to get an idea of how the landscape has changed, just compare the two photos below of the same spot. One taken on 1st May (when the grass is already turning brown, but the flowers were abundant) to that from 27th June. 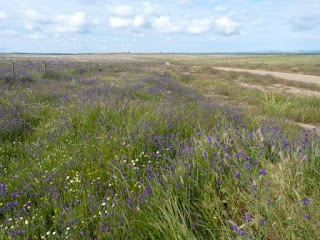 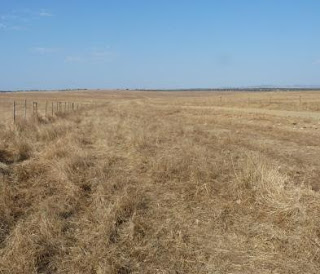 The plains by late June are a much quieter location, hardly any lark song, but we did watch two male Great Bustards feeding belly-deep in the tall dry grass, two Pin-tailed Sandgrouse flew over on their way to a water-hole, a male Montagu's Harrier was hunting and White Storks were busy collecting grasshoppers to take back to feed their young.

Looking back on the whole season, I have had the fortune to share moments like that with guests on over 90 days this year. Over that time I have shown people 210 species of birds, all but three of which have been found within an hour's drive from the house. It has been another memorable season in wonderful Extremadura.
Black Stork Purple Heron summer White Stork