Spring flourishes with a memory of winter 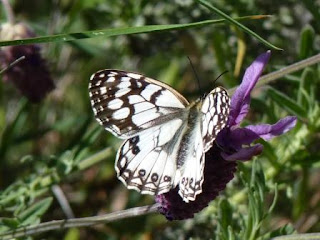 The month is ending almost as it began with cool, overcast and wet weather (yesterday even some snow fell in southern Extremadura!), but we have enjoyed superb weather for most of April and today's rain will be passing quickly as May arrives. The photo above shows a Spanish Marbled White butterfly on French Lavander - a glimpse of the colour and life that has been so breathtaking this spring. As I write, the sound of our garden Nightingale comes pouring in through the open kitchen door. Golden Orioles and Red-necked Nightjars are sounds that we are also hearing these days, species that had not yet arrived on migration at the start of the month, and yesterday a Reed Warbler sang quietly in the garden, a bird on passage, taking a few hours rest. Over the last few days there have been other passage birds too making brief apperances in the garden or just beyond: Pied Flycatchers, Willow Warblers and a singing Wryneck. Almost all of our Extremadura breeding species have now arrived on their territories, but the northward movement of birds through the area will continue for a few more weeks. It is always a rather exciting time, as surprises can turn up almost anywhere, although the best place to look for local rarities are the vast areas of rice-fields in the centre of the region. At the moment almost all of the rice fields are dry and being ploughed, in readiness for flooding and sowing over the next few weeks. The secret is finding the few, indeed very few, which are wet and muddy, as these can be like magnets for birds at this time of the year. In my regular routes through the eastern end of the rice region, I came across a couple of such fields, one with a very late Meadow Pipit and two migrant Yellow Wagtails, plus some gorgeous Collared Pratincoles (see photo below by John Hawkins), whilst the other had six very smart Kentish Plovers. Local birders checking an area well to the south-west had the good fortune to find Extremadura's first Red-throated Pipit, as well as a Spotted Crake. 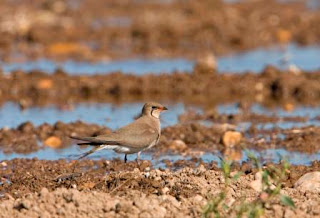 However, one bonus for my efforts was the sight of six Common Cranes (a family party of four and two other individuals). They were seemingly healthy (showing no sign of injury) I suspect these birds having failed to leave nearly two months ago with their conspecifics, will spend the summer here. Occasionally over-summering cranes are seen (I found one a few years ago in July). By coincidence, my copy of the recently published Atlas of Winter Birds in Spain (Atlas de las Aves en Invierno en España) arrived in the post at about the same time. Its cover shows two Lapwings (Avefrías or "cold birds" as they are called in Spanish, and a common winter sight) Based on three years of fieldwork by over 1000 people between 2007 and 2010 (the time I spent on the Winter Atlas fieldwork generated some exciting and enduring memories for me), analysed and published by the Spanish Ornithological Society (SEO/BirdLife), it is a fascinating book. I will browse through it for weeks, randomly opening it to look the winter distribution map of a particular species and read the text describing what this shows. What is significant is the importance of Extremadura for birds in the winter. It is the region of Spain with the highest species richness in winter. Indeed, apart from the high Gredos mountains in the north of Extremadura, the region almong with the western half of Andalucia boasts more species in winter than it does in spring. All the more reason to think of visiting Extremadura in winter as well as the always popular spring months!
Butterflies Collared Pratincoles Common Crane Golden Oriole Kentish Plover Pied Flycatcher Red-necked Nightjars SEO/BirdLife Spotted Crake Winter Atlas Wryneck