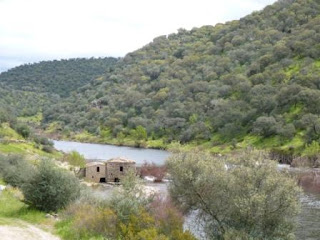 The reward for the relentless March arrived with a fanfare in April. Over the last week or so of blue skies and soaring temperatures, the landscape of Extremadura has rarely been so luxuriant or colourful. I have just completed several days of serious gardening, perfectly timed to weed, clean-up, plant and sow..a week earlier the ground was still too wet, a week later it may have dried-out and the parts of the vegetable garden would have become almost inaccessible. Beside me as I have hoed and raked, a Nightingale has been an almost constant companion, sometimes singing just a couple of metres from where I am working. There can be no other more exuberant, celebration of spring.

The spring migrants are now up-to-date with their arrivals. I heard the first Red-necked Nightajars of the year a couple of evenings ago as the stars were starting to come out. How the passage of a few weeks brings such dramatic change...as well as the Nightingales, the sound of Golden Orioles and Bee-eaters around the village, as well as the sight of Booted Eagles and Black Kites drifting overhead, have now acquired the familiarity of old friends. The spring has been good for orchids, with Patrick and I finding masses of Pink Butterfly and Giant Orchids in southern Extremadura at the beginning of the month. 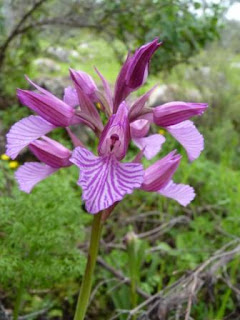 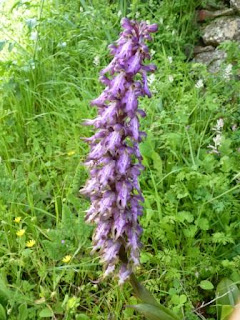 This is the busiest month of the year for us with the house full of guests and me spending almost everyday in the field with visitors. I had a thoroughly enjoyable and fruitful week's tour with Nigel, Muriel, John and Brenda just as the weather was on the turn. During that week the first Rollers were arriving, but there were still wintering parties of Siskins, feeding with the Hawfinches on the mast of the Southern Elm trees. It was during their visit that we had another memorable encounter with the Spanish Imperial Eagles at Monfragüe National Park. We had been waiting patiently at the viewpoint when we heard the adult barking from the nest. It (and it was the female) flew from the nest-tree, crossing the cliff infront of us and landed in the shade of an old holm oak tree. There the male was waiting with an item of prey (it looked like a Red-legged Partridge). The male flew to the nest, whilst the female gorged herself on the meal. On completing her feast, she then flew off with a small morsel, straight back to the nest (see Nigel Sprowell's photo below). Clearly the pair now have young to feed! 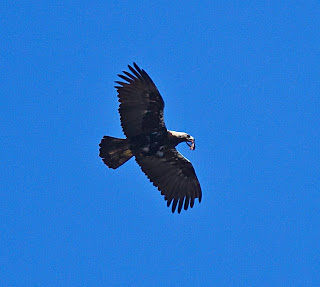 As well as the newly arrived summer vistors, we enjoy the through passage of other birds heading further north, travelling through much more quickly than in the autumn, there have been lots of Northern Wheatear, as well as birds like Whinchat, Pied Flycatcher, Common Redstart, Whitethroat and Western Bonelli's Warblers.

The cold and wet conditions that prevailed in the first half of spring, which dramatically changed in a matter of a few days, do seem to have put the "damper" of much of the Great Bustard display leks and Little Bustards were still in flocks of a thirty-strong into the second week of April, by which time usually the males are starting to display and compete. On balance though the conditions do promise well for a successful breeding season, which will be in stark contrast to the tough time the birds had last year because of the drought. As I was walking beside the River Almonte a few days ago (see the photo at top of post), never having seen it so high in April as it is at the moment, the hillsides truly verdant, with the colours of high spring, the place seemed simply full of life with birdsong, wheeling House Martins and Alpine Swifts, as well as butterflies, such as the Spanish Festoon, Black-eyed Blue and Clouded Yellow. The weather could not have been more different than it had been just three weeks earlier, but I was surrounded, indeed embraced, by all the rain had gifted us.