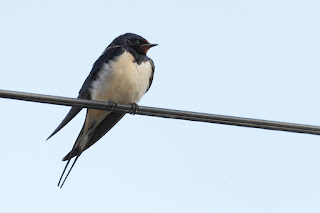 I hear them well before I see them. A calm, mild day in early February and the sky almost entirely cloudless. Garden chores have built up as a combination of wet weather and my periods of absence, and there is always a race to catch up at the turn of the season. I am turning over the earth in the vegetable garden. What a magnificent morning. I hear them again, the honking calls of geese. I struggle to find them and then, directly overhead, high against the bluest of skies, two skeins of Greylag Geese, heading north. Not quite perfect "V" formation, slightly ragged at the edges with two or three geese flying as outliers, but clearly on the move. Our wintering Greylag Geese  departing. I always find witnessing migration as quite moving, even emotional, as the annual cycle starts in motion again with the birds driven by a combination of internal and external factors: daylength, hormones, instinct and learning. I stood in awe and as I did so, just above my head hawked a Barn Swallow, singing. A perfect juxtaposition with the departing winter guests and newly arrived summer visitor. The swallows have been around in the village for a few days now, pairs checking out nests and males singing from the wires (see the photo from Raymond de Smet above). House Martins too are coming back to the nearby towns such as Trujillo and Zorita.

But it was the Greylag Geese that took centre stage this morning. And a few minutes later another skein was passing over. These Greylags are Scandanavian, arriving after the Common Cranes and departing a few weeks earlier. Our wintering geese in Extremadura are a quite a recent phenomenon. Traditionally the wintering grounds for Greylag Geese in Spain have been in the north-west (Zamora province) and the Coto Doñana. Extremadura was just a place that they passed over with barely a hundred or so staying through the winter. However by the 1990s, this started to change, partly because of further expansion of feeding opportunities for them in Extremadura with the spread of rice cultivation, leaving extensive stubble fields in the winter, and also because of the increase in the overall population of the species in Western Europe. In that sense, they are very like Common Cranes: adaptable and undergoing a big population increase. Today there are perhaps 15,000 Greylag Geese wintering in the central zone of Extremadura, with a few thousand elsewhere. I was touched with sadness as I watched them leaving, partly because of the sense of farewell until next winter, but also it drew a line on the chances this year of finding scarcer geese. One of the pleasures and challenges of winter birding is encountering a large party of Greylags and patiently examining the feeding flock, invariably standing deep in stubble, looking for a rarer goose amongst them. This winter has been good for unusual records, with species such as Bean, Pink-footed, Barnacle and White-fronted Goose seen.

I heard calling geese again and this time a truly perfect "V" was passing, but this time so high up they were barely dots against the blue. I blinked and they were quite impossible to find again, so high they were now invisible.  The first day of their journey to Norway.
Barn Swallow Grey Lag Goose