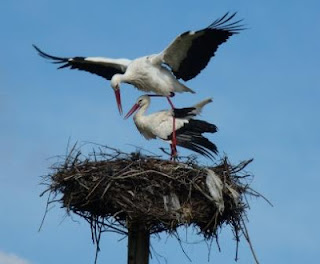 Despite some rather cold northerlies, more blossom is now appearing, the almonds completing their show as the mimosas start, with their gaudy lemon yellow flowers. Buds are opening..yes, the sap is certainly rising. There is noticeably  more bird song now: Serins, Woodlark, Great Tit, Linnet, Hawfinch, and woodpeckers are drumming. Nesting and egg-laying are just around the corner and the bird world is getting full of courtship and mating. Nuptials with the White Stork are impossible to miss. Probably most of the males that arrived weeks ago on their nests are already paired and the wonderful sound of bill-clacking can be heard from town squares where the nests sit on church roofs and bell towers. This is a bonding call, far-carrying, which the birds use as a greeting ceremony right through the breeding season. The bird standing on the nest will throw its head back and then drop it down, then toss it upwards again, bill-clacking, as its mate approaches. It surely must have provided the idea for someone centuries ago to invent castanets. The sound is very similar and both are mechanically produced - in the case of the White Stork by the knocking together of the mandibles of the bill. I have even seen storks bill-clacking in flight. Away from towns, the sound of clacking will betray the presence of a nest on top of a holm oak tree or on a pylon. Although associated in our minds with towns and villages, there are plenty of storks nesting away from human habitations: indeed there are probably as many White Storks nesting on trees as on buildings in Extremadura. At this time of the year, the bill clacking and greeting may well be the precursor of mating, as happened with a pair I was watching at the amazing stork colony (city would be a more accurate word) near Malpartida de Cáceres. I took the photo above just as the copulation had concluded: in birds it is always an extraordinary spectacle as the male (in the case of storks, seemingly all wings and legs) manages to balance for a few seconds as it mounts the female.

Even more extraordinary for me was a sighting earlier that same day. We were in the Monfragüe National Park and enjoying the spectacle of a pair of Spanish Imperial Eagle. The male was sky-dancing, a wonderful courtship display as it rises in the sky and then closes its wings and drops like a stone, to suddenly brake and then rise again, repeating the performance. The female was collecting leafy twigs from holm oak trees, the finishing touches to its nest. It then flew in front of us and landed on a ledge on the rock face nearby. It sat and preened, before appearing to stoop a little. At that point, the male flew from a tree calling, its bark echoing across the gorge. Remarkably it then landed beside the female and within seconds had mounted her, his wings outstretched to full span and his bill facing downwards towards her nape. The mating took several seconds before the male hopped down and then flew off. The female remained on the cliff and preened herself again. I had witnessed this for the very first time and what amazing luck for the group of people I was leading. It was an exhilarating privilege.

Many plants too are in the mating game at the moment and around as we watched the eagles were stands of the exquisitely delicate Angel Tear's Narcissus, whilst not far from the storks, I photographed the rather more showy Hoop Petticoat Narcissus below. The landscape looks superb at the moment, lush with pools of standing water...all augers well for an outstandingly good spring for flowers this year. 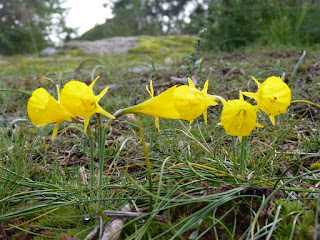