Herons and egrets in Extremadura 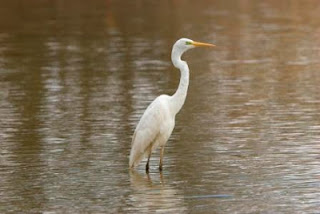 This is shaping up to be a good autumn as far as the weather is concerned here in Extremadura, with plenty of rain so far this month. The landscape is looking magnificently green. The gorgeous little bulb, Narcissus serotinus is in flower on the plains, putting forward a wonderful, if ephemeral, show. At last the Common Cranes are arriving too, rather later than usual this year. Four days ago I visit the crane reserve at Moheda Alta, where there were 77 (yes, I counted them all) Common Cranes feeding on the rice stubble fields, and just a few hours later that number had increased to over 300 as parties arrived through the morning.

During the week I picked up my copy of the study published by the Spanish Ornithological Society  (Garrido, J. R., Molina, B. & Del Morel, J. C. (Eds) 2012. Las garzas en España, población reproductora e invernante en 2010-2011 y método de censo. SEO/BirdLife. Madrid) on the census of breeding and wintering herons and egrets that took place in 2010 and 2011. It is fascinating reading.  In the popular imagination, Extremadura is not famous as a region of wetlands in Spain, yet it comes in second place (after Andalucia) in terms of importance for wintering herons and egrets and third in terms of breeding pairs and number of colonies. Of course, Extremadura has an extensive zone of irrigated land, the second largest rice-growing area in Spain, many reservoirs and is crossed by two of the peninsula's largest rivers, the Tajo (Tagus) and Guadiana. The latter especially is important for breeding herons with its belts of fringing vegetation and wooded islands. The popular birding spot of Arrocampo is entirely man-made: a reservoir built to provide cooling water for the nuclear power station at Almaráz. Its constant water-level and reedbeds make it excellent for breeding herons and egrets, with no fewer than nine species nesting this year, including Extremadura's first Great Bitterns.

As a family, the distribution of many of these species has been increasing across Europe. Little Egrets are now common in many parts of Britain, whereas thirty years ago they were real rarities, In Spain, the Great White Egret (see John  Hawkin's photo at top of post) first bred in 1997 in the Ebro Delta, spreading across from eastern Europe. Although according to this recent census the population is still small (53 pairs) it is now nesting in five regions of Spain, including Extremadura where there were two pairs at Arrocampo. However, there were almost 1,500 counted during the winter 2010/11 and indeed one can expect to see the species on almost every visit to lowland rivers, rice cultivations and reservoirs with emergent vegetation. Many of these are wintering birds from central Europe, but each spring more and more remain, initially as non-breeding stayers-on....the species was present in the spring in Arrocampo for several years before breeding was proven. So in all likelihood, the breeding population is likely to increase significantly. 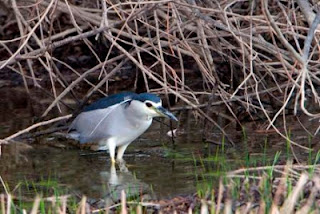 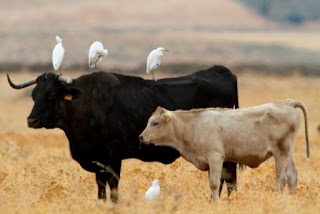 It is satisfying to see the overall results of surveys in which one had taken a small part (I did counts of some of the winetr roosts and breeding colonies). I also see a good match between what emerges from this national census and my own experience over the last few years in Extremadura. Not only are there more Great White Egrets, but we also have more nesting Spoonbills, and I am recordng more wintering Little Bitterns, Squacco Herons and Glossy Ibis than I used to. There must be a range of reasons for the general increases shown: Cattle Egrets make great use of rubbish tips, there has been an increase in the area of land now flooded for rice, the waterways are generally cleaner, introduced fish and other species like American crayfish may be increasing the food supply, and egrets were susceptible to severe persecution in the past, and now are benefiting from protection.
Black-crowned Night Heron Cattle Egret Common Crane Egrets Great White Egret Herons SEO/BirdLife