All change for autumn 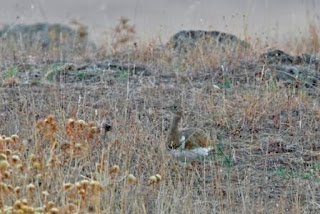 I had been away for over six weeks, indeed the longest absence from my beloved Extremadura for eight years. When I left summer was still upon us, with the landscape looking tired, dry and withered. The Red-rumped Swallows nesting by the kitchen door had their second brood of chicks noisily chattering away within their beautifully built nest. Coming back earlier this week, the first thing that struck me was how the landscape had become an emerald green. This is how we always hope it should look like by mid-October and is testimony to the autumn rains. For us, in many ways, autumn feels like a second spring, a changing of the guard as far as the birds are concerned, but also a transformation of the colour of the fields and plains. The Red-rumped Swallows had left just a few days before I returned, but as soon as I arrived home, I heard Robins calling. They are winter visitors to our garden and their ticking notes and winter song will be with us now right through to spring.

I headed out to nearby plains today, just for a couple of hours, squeezed between shopping and collecting Patrick from school. It is always a pleasure after a long absence to give one's local patch a quick check, getting a feel again of what is around. At my first stop a party of perhaps sixty Pin-tailed Sandgrouse were feeding unconcernedly in the middle of a field by the road. This resident species was joined in the field by hordes of Lapwings and even more Meadow Pipits, both wintering birds from central and northern Europe. A little bit further on a rather haughty group of eight Great Bustards, looking perhaps slightly bedraggled after yesterday's nonstop rain, stood close to the road. Wonderful views.

I headed out to another area and came across one of the sights I had been looking for. Glorious though they are in the spring, with the male standing out when displaying with its distinctive call and little jump, there is something very special about wintering flocks of Little Bustard. This is a species in big decline and in the spring one can struggle sometimes to find more than  a handfull of displaying males nowadays. Yet here were over a hundred birds in flight, turning white and then dark as they twisted in unison against the sky. Not by any means a big flock by winters' standards, but a joy nevertheless, as they dropped to the ground. There they become remarkably difficult to see. As you can see in the photo by John Hawkins at the top of the post,  they prefer to stand in places where there is tall dead vegetation such as thistles and grasses left over from the spring. The males have lost their bold black and white neck plumage and, like the females, blend in cryptically with only their white underparts catching the low winter sunshine. There had been over a hundred birds in flight, but I was hard pressed to find more than twenty or so on the ground. 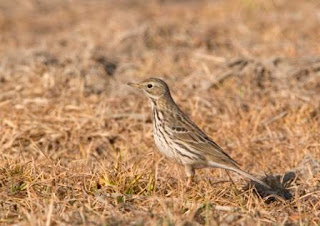 As I drove along a fine male Hen Harrier flew up from a fence post and quartered the field, and just a few minutes further on, a second male was cruising low behind a stone wall, ready to ambush small birds. And small birds there were many. As well as the resident Calandra Larks, Corn Buntings and Spanish Sparrows, all in large flocks, there were a few late summer migrants still: a Common Whitethroat, Northern Wheatear and a Whinchat. But they were vastly outnunbered by wintering Meadow Pipits (see the photo). The abundance of these pipits provides a reliable food source for raptors like the Hen Harrier, but especially the Merlin. And to cap it all my brief midday visit to the plains was made complete by a magnificent view of a female Merlin, sitting on a cowpat in a field, close to the road. I guess it must have eaten earlier that day, because it stayed put as I stopped, wound down the window and watched it. And there it remained as I headed back to collect Patrick from school.
Great Bustard Hen Harrier Little Bustard Meadow Pipit Merlin Pin-tailed Sandgrouse

Sue said…
I've only just discovered you blog - many thanks for sharing your experiences and keeping me informed as to what to be looking for!
Un Saludo de Alange
25 October 2012 at 16:32