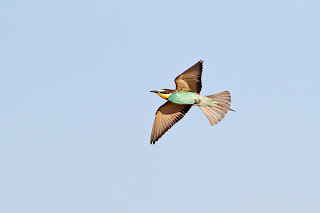 Another heatwave, fiercer than before with temperatures now over 40 degrees in the shade by our kitchen door for most of the afternoon and evening. There is a seemingly still mood everywhere. People are indoors for most of the day, getting work done outside first thing in the morning and taking the evening walk (el paseo) with neighbours. I have completed another annual tasks, always in my August to-do list, chopping off the shoots from the bases of the olive tree trunks. Over the late spring these have sprouted to form first a stubble and then by August a dense mass of vertical shoots. Over the last couple of mornings, using a small hatchet, I've cleaned the bases of the trees and there are now sheep in the paddock to nibble off the little shoots. It is a satisfying, pleasing task, leaving the broad bases of the trees clean, their wonderfully gnarled outline now defined and precise. What wonderful old specimens they are, with numerous holes and niches, one having provided a nest site for a pair of Hoopoes every year since we have been here, and who knows for how many years beforehand. A traditional site indeed. 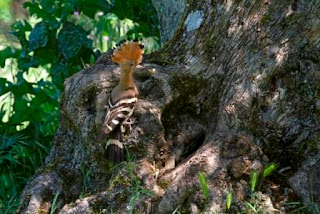 In the garden, the source of drinking water becomes ever more important for the birds, most delightfully the parties of Long-tailed, sometimes perhaps a dozen or so, who confidingly come to drink and bathe whilst we are just a few feet away. 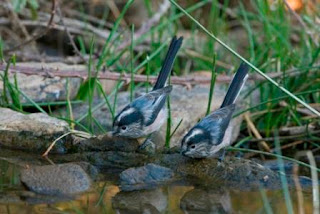 The cypress trees have a fine crop of green cones at the moment, on which Hawfinches are gorging themselves. And just to show that migration is also underway, three Green Sandpipers flew over, high above the house, this morning as I sat outside with a  cup of tea.

But perhaps the most evocative at this time of the year and the bands of Bee-eaters that drift over (See the photo at the top of the post - all of today's pictures were taken by John Hawkins).  They have finished breeding now and these parties are a mixture of adults and juvenile birds, feeding just prior to their journey to Africa. Just as in spring when the very first Bee-eaters to arrive herald themselves by their fluty "pprrruit" calls and appear at great height, generally heading north, these bands in August announce their appearance vocally. But unlike in the spring,  this time the flocks of twenty or thirty birds are much lower and they lack the directional urgency of the first arrivals. Now they appear almost lazy, with a flowing, buoyant, drifting flight, almost as if they were allowing themselves to be carried by the faintest of summer breezes. I enjoy this sight as much as I can, grateful that their calls had me looking out for them and knowing that within just a few days they will have gone.
Bee-eaters Green Sandpiper Hawfinch Long-tailed Tit Olives

James said…
Hi – Will you please post a link to your Blog at The Birding Community ay vorts.com? Our members will love it.
It's easy just cut and paste the link and it automatically links back to your website… it’s a win win. You can also add Photos and Videos and join Birding discussions if you like.
Email me if you need any help or would like me to do it for you.
The Birding Community: http://www.vorts.com/birding/
Thanks,
James Kaufman, Editor