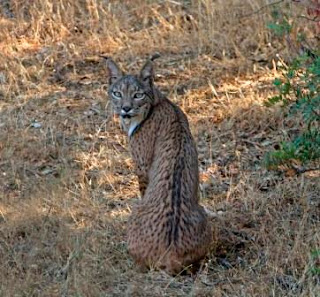 What struck me almost immediately was the number of rabbits. We do not see many in Extremadura, but here I was seeing more rabbits in one morning than I would in more than a whole month at home. This was a good sign, because our quest on this mid-July expedition was a rabbit-specialist, the Iberian Lynx. Claudia, Patrick and I, along with our friends Anthea and John Hawkins (who took the attached photos of Lynx here) and David Hosking, had ventured outside Extremadura to spend four days in the Sierra Morena, near the Andalucian town of Andújar. 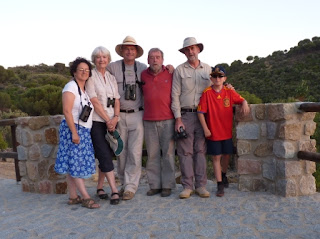 The hilly terrain was covered by holm oak dominated dehesa, open woodland providing grazing. There were stone pines dotted around and exposed, weathered granite boulders, reminding me of the berrocal habitat around our home town of Trujillo. The Jándula river ran through the landscape, with two dams creating narrow, steep-sided reservoirs. Most of the landscape in view was either Natural Park or large hunting estates. 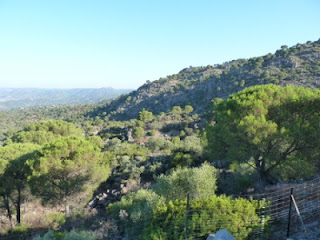 This refuge for the Iberian Lynx has attracted visitors and information was readily available to recommend particular viewpoints to watch from. Everyone though repeats the same message: lynx sightings depend on a combination of equal doses of considerable patience and lots of luck! We were trying our luck in the height of summer, with afternoon temperatures in the high thirties and most mammal activity being crepuscular or noctural at this time of year. Our strategy was clear. We had to be out in the first two or three hours of daylight and for a similar period in the evening. We could afford to rest during the hottest part of the day, although Golden Orioles and Azure-winged Magpies feeding on pears in the Los Pinos hotel garden (http://www.lospinos.es/) provided a suitable distraction for those who did not want to have a siesta!

The first two mornings we spent high on a ridge-top, affording excellent views across a valley, criss-crossed by tracks. It was an area where many people had seen lynx. But after a total of six hours there we had drawn a blank, although there were plenty of rabbits, good numbers of deer as well as a family of Wild Boar.  Green Woodpeckers were also very common and we had sightings of White-rumped Swift as well as a Spanish Imperial Eagle carrying a Wood Pigeon in its talons. The evening light had been better by the Jándula river, where for two evenings we had also no luck as far as lynx was concerned, but White-rumped Swifts were watched coming to drink and an Otter was present.

It was driving down to the river that, when least expected, we had our very first encounter with the Iberian Lynx. Just a kilometre from the hotel at 8 pm, still a good two hours before dusk, a lynx crossed the road in front of us and slowly walked up a little path from where it inaudibly called out to its two kittens. For a brief moment we could watch from just a few metres away a female with her two young. She turned to look at us and then led her family away to cover. The experience lasted just a few seconds, but there in front of us had been the world's rarest cat with a promise of future: her two youngsters. Despite driving along that stretch of road several times afterwards, we were never to see her again.

We decided to switch strategy and focus on the vicinity of the Jándula river. It was there the following morning we had another glimpse of a lynx. After 90 minutes of waiting, we watched an adult slowly making its way down a track, just thirty minutes after a rather noisy party of fisherman, complete with a small dog, had walked up the same path. The views were interrupted by trees, but we could take in its distinctive shape. The legs are long (the hind legs longer than the front legs), the body also long and held horizontally, the short, stubby tail stuck upwards and the rather angular looking head with tufted ears pointing upwards and its pronounced "beard". It left the path and disappeared within a clump of trees, startling a group of Red Deer which ran off in a panic - a reminder that they have also been known to take young deer calves. We were starting to consider ourselves lucky now: two sightings within the space of twelve hours. 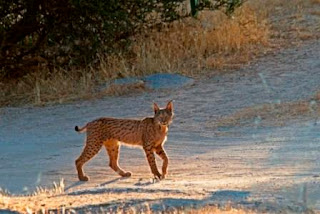 The following morning there we were again, by the river. We had split into two groups with walkie-talkie contact. David called me just after 8 am with the news that a lynx was approaching from below us. Within seconds we were watching one make its way slowly across the bridge spanning the river. Now we could watch it at length and take in its markings. Another name for the Iberian Lynx is the Pardel Lynx (the scientific name is Lynx pardinus), meaning leopard-spotted and indeed this animal was heavily marked with over the whole body. It is one of the ways of distinguising this species from the somewhat larger Northern Lynx. After crossing the bridge it sat for a period on a boulder, looking sleek and long-bodied, with its back to us. It then moved from the rock and my attention was drawn to movement nearby. Another lynx appeared, this time perhaps a bit bigger, and certainly less strongly marked and with an overall more orange tone to its fur. This naimal then crossed the bridge towards us and then slunk off to hide amongst the big boulders close to the river.

During the day in the summer this mixture of boulders and bushes provides many places for the lynxes to rest, as well as good spots to ambush rabbits feeding nearby. A lynx needs to eat on average a rabbit a day and it was the collapse of the rabbit population in Spain caused by  the arrival of myxomatosis in the 1950s and hemorrhagic pneumonia in the 1980s that was one of the main factors in the disappearance of Iberian Lynx over much of its former ranges, coupled with habitat fragmentation. As populations became small and isolated, so they became further vulnerable to other factors such as road mortalities. The last population of Iberian Lynx in Extremadura probably died out in the 1990s. By 2002 a census showed that the total  population of Iberian Lynx had fallen to about 160 individuals with breeding only taking place in two areas (both in Andalucia): the Coto Doñana and the Sierra Morena (the latter being the stronghold). The species had now gained the ignominius status of being Critically Endangered and the rarest cat in the world. Thankfully governments and conservationists took action. With a conservation plan in place, there have been actions on various fronts. Rabbit populations have been boosted by careful habitat management and repopulations, lynx conservation is winning support from local landowners and others and captive breeding centres have been established to build up numbers for reintroductions elsewhere. One of these centres is in Extremadura and in March this year two lynx kittens were born. Once again young lynx are walking on Extremaduran soil, albeit in a large compound and one day the species will be back in the wild here.  Overall the wild population of Iberian Lynx is now thought to have risen to over 300 individuals in Andalucia. 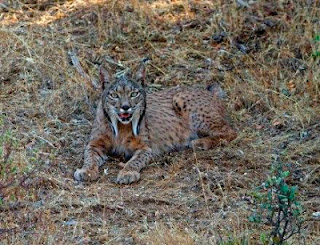 Looking at this rare and beautiful creature sitting in the shade or walking with its long strides in the dappled woodland shade, I wondered if I would ever have a sighting like this in Extremadura. It was reassuring to know that many dedicated people are working to bring back the Pardel Lynx to places where just a few years ago it was thought have been lost for ever.