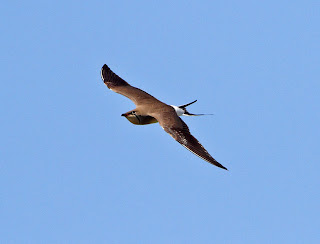 Late July and dawn down on the rice fields. The crop is standing deep and green, covering practically all the fields around me. Already there are teams of people working in the fields, pulling out weeds and a couple of tractors are out there as well. At first glance the area seems almost birdless, apart from a few White Stork standing on the banks separating the fields. A distant Marsh Harrier is quartering the ditches. There are parties of the tiny finches, the Red Avadavats, with the males now in full breeding plumage: bright red with white spots, hence their delightful Danish name: the Strawberry Finch. Originally from India, they are quite at home in the ditches beside the paddies and have their breeding season in the autumn.

I turn up a little track and there, resting in front of me, is the biggest flock of Collared Pratincoles I have ever seen here. I quickly estimate 250 birds and when I later go through the photo (below) I count 262...not bad! 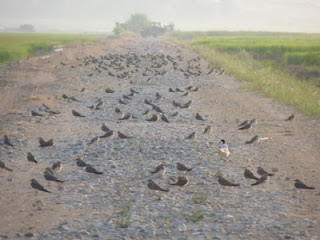 The group was a mix of adults and the paler juveniles, a post-breeding flock. Amongst them was a juvenile Gull-billed Tern, whose parent was returning every few minutes with a morsel of food and, indeed, just makes it into this photo. Pratincoles are rather bizarre looking birds. They are grouped into the waders, but when on the ground, look a bit like small terns, although generally have a very hunched appearance, and then totally transform in flight (see John Hawkins' photo at the top of the post). The sky is their element with long, slender wings, forked tails and striking white rump. They are tremendously aerobatic, gliding and ptching, diving and swooping,  catching insects like swallows. 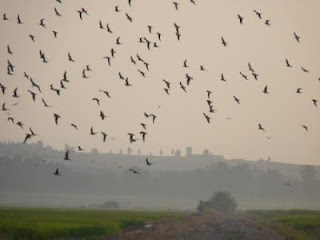 I see my first pratincoles of the year in late March when they will be hawking insects over the fields, especially within easy reach of likely nesting places. Here in Extremadura they breed on small islands on reservoirs as well as on bare stony fields left fallow in otherwise irrigated areas of rice and maize. The total breeding population here is estimated to be between 700 and 1000 pairs, varying a lot each year depending on the availability of suitable conditions. By July, they start to form post-breeding flocks. Overall I estimated that there were well over 300 visible in the area where I stood, counting the group on the track and other small parties nearby. However, the largest flock ever seen in Extremadura was about 800 in 2005, not far from where I was visiting, also in July. They tend to leave early, heading south for Africa by mid-August. Indeed, almost surreptitiously, the autumn arrivals and departures are already underway. As I watched the pratincoles, two Common Snipe were disturbed by some of the farm workers and flew up from the wet field. This was a very early arrival date for this winter visitor here, but other wintering waders like Lapwing and Green Sandpiper have been arriving for several weeks now and soon the first passerine migrants will start to appear in the garden as well....quite unlike the arrival of spring which is heralded by colour and song, there is almost a lazy drift into autumn, quite befitting the languid warmth of a summer afternoon.