Snug beneath the brambles 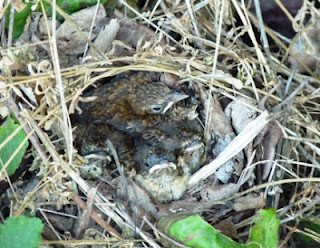 The brambles were starting to spread out from the shade of the quince tree towards the row of onions in our small vegetable garden, so armed with pruning shears I set out to tidy them up. A distinctive high pitched alarm call was coming from a few metres away, a Nightingale. I had heard this on previous days on my routine visits to tend the vegetables. As I moved the brambles away, a slight movement caught my eye. I looked more closely and to my astonishment there was a neat grassy cup on the ground, amongst dead leaves, tilted slightly and containg four tiny naked, blind nestlings. It was the first time I had seen a Nightingales's nest and what was more surprising was it was no more than a couple of metres from the water tank, the focus of my daily visits since the vegetables now need watering every day. Unseen by me, the Nightingales had built the nest, laid a clutch and sat and incubated them. The brambles had provided excellent cover.

I gathered the cut bramble and placed it carefully to act as a barrier near the nest in a hope that it would remain relatively concealed. Nestlings on ground nests are very vulnerable. There are cats in the village, although the vegetable plot is fenced and our dog, Moro, enjoys nothing more than chasing cats, so perhaps the risk from them might be less. However, there are other mammalian predators around such as Stone Martens, as well as snakes and Azure-winged Magpies.

Each day on my trips down to the vegetables I would take a careful but quick look, from as far as way as possible to check on progress. Always the attentive Nightingale adult would be calling to warn the nestlings of my presence. On 10th June we took the photo at the top of this posting, where you can see that the four chicks are now well feathered with eyes open. During the night of the 11th, I heard the Nightingale alarm calls frequently and when I took a quick look at the nest first thing yesterday (12th June) it was empty. I wondered if the young had successfully fledged or had been predated. The nest looked neat and undamaged and I could still hear alarm calls nearby. Surely the parents would not be giving these had the young been taken. My answer came just a few hours later when I saw one of the adults carrying food in its bill and nearby a recently fledged chick fluttering for cover. I was delighted that the chicks had made it to fledging despite my accidental disturbance to their cover. Since then the adults have been busy collecting food, sometimes from close to our doorstep and I hear their warning calls in different places as presumably the brood is now dispersing a bit from the nesting site. 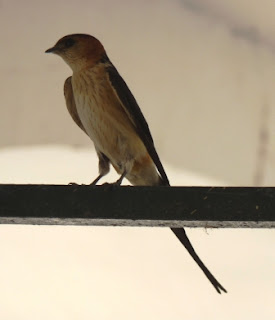 Meanwhile, the subjects of the previous post, the Red-rumped Swallows must be incubating now and are charming us with their confiding behaviour. They fly into the house a lot, circling around before flying out again, although sometimes the male lingers a bit...a couple of days ago whilst I was answering emails, he sat on top of the sitting room door singing. If it goes on like this we will end up giving them names!
Nightingales Red-rumped Swallow