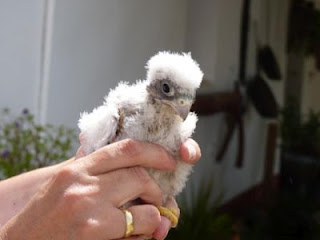 For the best part of a week a southerly airflow has brought in the highest temperatures of the year so far. We live nestled beside a gentle hill, surrounded by trees in an area locally acknowledged as having its own moderate microclimate, always a few degrees cooler than the town of Trujillo, just a few kilometres away. That being said, the mercury in the thermometer in the shade just outside the kitchen door has been hitting 38 degrees Celsius most afternoons over the last few days. With Patrick's school term now finished, we are now in full summer mode!

In more exposed areas, the temperature has been reaching 40 Celsius and what many people do not realize, the temperature here hits the highest point for the day in the summer at about 6 or 7 pm. The early morning (sunrise here is just before 7 am at the moment) offers perfect conditions to be out, but inexorably the heat builds up. By early afternoon one is driven indoors. This is when we are glad of the local vernacular architecture. Thick walls and small windows keep the house cool indoors, especially by making sure that all the doors and windows are closed, with shutters closed too..anything to keep the hot air out. Lunch and then the finest of Spanish traditions, the siesta. The evening then offers a small respite. With the sun setting at about 10pm, there is nothing better than having a late evening meal at dusk outdoors.

The heatwave affects the birds as well, of course. We keep a small puddle of water in the footbath of the shower beside the swimming pool and birds appear almost to queue up to drink and bathe: Nightingales, Azure-winged Magpies, Woodchat Shrikes, Hawfinches...I took guests from the Unitied States out birding yesterday and in the Monfragüe National Park we stood just a few feet away from fresh water coming from a spring which attracted family parties of Blue and Long-tailed Tits, Chaffinches, Hawfinches and Subalpine Warblers.

Another feature of the time of the year, of course, is the appearance of many young birds. The photo above shows a Lesser Kestrel chick which was brought to us. It was found on the road, beside its dead sibling. We kept it overnight, giving it water and some tinned catfood, until the following day when it was collected by the local Animal Rescue officer. He told us that it was the fourth Lesser Kestrel nestling that he had picked-up and thought the heat was causing some to fall out of their nests prematurely. If one remembers that most are nesting under terracota roof tiles, it is easy to imagine how hot it could be getting for these young birds.

The Nightingales that featured in my last posting fledged and are still being fed by their parents in the garden. I mentioned in that posting how they had nested just feet away from the water tank in the vegetable garden and it was just by chance how I discovered the nest. Equally, we were surprised this week to discover that Mallard had nested in the garden too! Once or twice over the last few weeks I had seen a female Mallard in the vicinity of our tiny pond, but a few days ago as I was walking back through the garden to the house, there was the duck again, this time with its ducklings. Two, in their panic when they saw me, got tangled up in some dead thistles, so I rescued them and here they are: 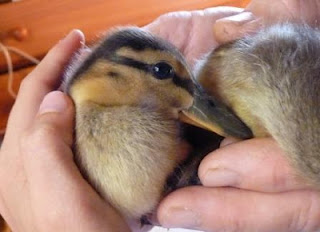 Happily they were quickly reunited with Mum and are still happily sheltering in our pond.

But perhaps the memorable and special sighting happened yesterday. With our American guests, I was standing in Monfragüe National Park at the site where Spanish Imperial Eagles have nested close to the river. As we arrived the pair of adults were soaring high overhead. A friend of mine had told me that the last time he was there, just a few days ago, the eaglet was fully plumaged and standing tall on the nest. I took a look at the nest but there was no sign of the youngster.  A few minutes later, we watched it fly across the river, its juvenile plumage with not a single worn or damaged feather, looking immaculate, indicated that this was a bird that had only just left the nest. It drifted out of view. Later, we walked back to the car when a movement drew our attention. There on the river bank, stood the recently fledged eagle. It hopped down to the water's edge to drink. Everything about it spoke of newness: not just its pristine feathers, but even its feet and the yellow gape of the bill, were bright and clean, spotless, untarnished. A bird setting out shortly to become independent. Who knows what fortunes lay ahead for it. All we could do was to to enjoy and feel priviledged to witness the scene, and thank the baking summer heat for encouraging this special bird to come down to quench its thirst, providing us with one of those memories that one knew instinctively would remain with one forever.