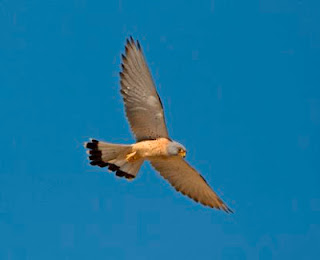 On Saturday 18th February I saw the first Lesser Kestrels of the year. Two of these compact little falcons were gliding over the main square of Trujillo, wheeling over the roof tops of the medieval quarter. Later that same day there were others coming to land on the tiled roof of the Bull Ring on the outskirts of the town, where last year no fewer than 27 pairs nested. Standing to the west of the building in the afternoon, the sinking sun behind one, this is a splendid way to end a day in spring and summer, watching the Lesser Kestrels returning from their foraging trips to the plains, circling, landing, giving their distinctive soft chattering call and tucking themselves into the spaces between loose tiles. A few days later, more birds had arrived and we watched a particularly amorous pair copulate three times during about fifteen minutes, the male making a distinctive thin high-pitched call. This was a particularly fine looking male too, with its peach-coloured underparts, with just a few dark spots on the flanks, dove grey hood, brick red back and wing coverts, with the greater coverts grey, showing as a broad band between the reddish forewing and dark flight feathers, a feature never shown in the Common Kestrel. Our Lesser Kestrels had spent the winter in West Africa, where they meet in huge winter roosts. The return trip is done in four or five days, meaning that in all probability the birds that were flying over the town that Saturday had started the week in Senegal.


So the signs of spring are appearing, although since we are apparently suffering the worst winter drought in seventy years, the landscape is looking more like early autumn. The dominant colour of plains should be emerald green at this time of year, instead it is grey, looking very sad indeed. Indeed, in many respects the autumn colours are more attractive, more golden, burnished yellow, reflecting the fruits of spring and summer. At the moment we are presented with fields that look withered and tired, almost as if they have given up.

It was out on the plains to the south of us on 19th February, the day after our first Lesser Kestrels, that I was out again with the group from Honeyguide holidays. The theme of this year’s holiday was the Cranes and we had seen hundreds feeding on the rice fields a few days earlier. The visit to the plains was in search of other birds and we stopped late morning on an area of higher ground because I had just spotted some Great Bustards. We stood on the side of the road, enjoying wonderful all-round vision, across a seemingly vast panorama, scanning and finding more Great Bustards. Green-striped White and Western Dappled White butterflies were on the wing. Suddenly we picked up the bugling calls of Cranes and there to the west, not far from where we stood, a party of about a hundred Cranes circled in a rather untidy fashion, slowly gaining height on a thermal. They called continuously and loudly. After several minutes they achieved a better defined group and headed in a loose skein on a north-east bearing. We watched them into the distance, the mountains ahead of them, as their group broke-up again and they circled on another thermal, so repeating the procedure, rising, regrouping and heading off again, still north-east, until they disappeared from view. By now another group was calling and had also found the original thermal and was circling as they rose. They too then headed off north-west in a skein. As we looked southwards, the sight was extraordinary. There were groups and group of circling, calling Cranes and lines and lines of Cranes, and all heading in our direction.


These were birds on the move, a mass exodus, synchronised. For what must have been more than an hour we stood there, picking up distant groups, watching them approach, find their thermal and then continue, all in the same direction. As we stood, other calls entered the soundscape as two skeins of Grey Lag Geese also passed overhead. Their formations were far more professional, neat V-shaped structures. They did not stop to soar on thermals, just continued flapping, single-mindedly and, interestingly, on a different bearing: due north.

But it was the Cranes which had us rooted to the spot. We had seen Cranes everyday, close views of family groups and large foraging flocks, but nothing compared with the experience, indeed the emotion, of seeing these birds at the start of their spring migration, taking a well-known route, across to north-east Spain, over the Pyrenees, across France, Germany and then many congregating in southern Sweden, and watched by peoples throughout their journey. This was not a local movement between feeding areas, it was a departure. It was our chance to bid farewell to these wondrous birds that had been so much part of our landscape all winter. We all stood in silence and awe, our throats dry and tight with the quiet realisation that we were witnessing something that we would remember for the rest of our lives. 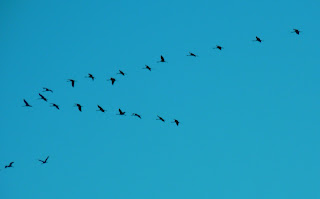