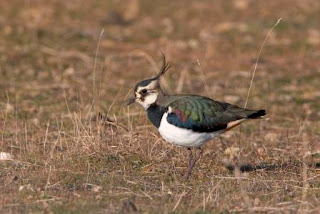 A rather nasal "cheee-aw" cut through the crisp morning air: the unmistakeable alarm call of a Northern Lapwing. This was not from a distant bird overhead, instead it came from our olive grove. And there it was, flying up from the ground with its bold black and white tail and heavy wings which look wider and rounder beyond the carpel joint, giving the bird its characteristic floppy, slow buoyant flight. They are gorgeous birds with irridescent upperparts, which show off to perfection in the Spanish sun and an exotic crest.  It was the first time I had seen one actually in our garden, rather than flying overhead. Later that day it was back. Since then, presumably the same individual, has been on the same patch of ground everyday and almost all day long. It seems to have set up a small winter feeding territory because yesterday it was seen to chase another Lapwing off.

The Spanish name for the Northern Lapwing is Avefría which literally means cold bird, probably derived from bird of the cold. Although there is a small breeding population in Spain, it is an abundant winter visitor and can be seen throughout Extremadura on the plains, wetlands, pasture and cultivation, even on roadside verges. I wonder if the reason why we have one in our olive grove at the moment is due to the combination of the severe winter drought we are suffering and unseasonally cold weather. The ground is frozen in the morning and the low termperatures, dry conditions and clear blue skies means that the soil is parched and almost baked hard throughout the day. Lapwings must be finding it hard and perhaps are spreading out into less preferred habitats, finding places where under the influence of a weak afternoon sun, small invertebrates might venture to move.

The term winter visitor is rather loose, in the sense that my first Lapwings of the "winter" are usually appearing at mid-summer, along with the first Green Sandpipers, another wader from northern Europe. Perhaps these first arrivals are failed breeders, or at least birds that bred early from the southern part of their range, because the main arrivals do not flood in until the autumn. Most depart in early spring, so from being such a characteristic bird of the plains in early February, they become much scarcer by the end of the month. A few pairs do breed in Extremadura but are very localised. The only nesting Lapwing I have found were in muddy fallow fields in the rice-growing area in central Extremadura. It was mid-July, but the young were still downy and it made me think whether they were broods from birds which had abandoned breeding earlier in the season somewhere in  northern Europe and had found suitable conditions here. It was fascinating and most curious.

I expect that "our" Lapwing will set off north in a few days time, joining the passage of other birds already heading north. Skeins of Grey Lag Geese have been passing overhead, whilst yesterday Patrick and I watched concentrations of hundreds of Black-tailed Godwits and Dunlin, along with smaller numbers of other waders such as Ruff and Little Stint, feeding non-stop in select rice fields, testament of the fact that many waders clearly migrate straight over the Iberian Peninsular rather than following the coastline.
Black-tailed Godwit Lapwing Waders

Anonymous said…
A good garden bird Martin! I enjoy seeing the wintering flocks of lapwings on my visits to the area.
I wonder if any of the Spanish winter birds are from as far afield as the Northumberland breeding grounds,where I love to watch them in the summer?
Alan J.
20 February 2012 at 11:57

Martin Kelsey at Birding Extremadura said…
Thanks Alan.I fear that the severe winter drought here is taking its toll on Lapwings. There is very little food for them now and one comes across some very weak birds.
29 February 2012 at 07:30