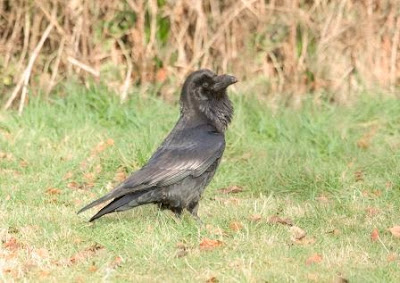 Sometimes it is impossible to resist being anthropomorphic...describing animal behaviour in terms of human attitudes and motives. Two incidents last week on the same day, at the same place (indeed minutes of each other) prompted such a lapse! I was with a group of four people, David and Kath from the north of England and Liz and Brian from Wales and we were at the wonderful Portilla del Tiétar viewpoint in the Monfragüe National Park. It is the sort of place where one can easily spend hours, just waiting for birds to arrive, enjoying the magnificent scenery and other wildlife. Angel Tear's Narcissus was coming out into flower near where we stood and an Eagle Owl sat incubating her eggs. We spotted an Otter swimming to a rocky bay with a catfish in its mouth and watched as it clambered up onto a rock to eat it. Then it swam out again to catch another. This caught the attention of a Grey Heron which flew in to stand beside the bay. The Otter returned to the bay and ate its fish whilst the heron watched. Out it swam again. This time the heron was ready for it. As the Otter returned with yet another fish the heron positioned itself at the spot where the Otter was coming up. The heron got ready, crest raised. The Otter appeared, fish in mouth, and took one look at the heron as it to say "look what I've got!", It then deliberately turned its back to the heron and sat there eating its fish...one could imagine the heron scowling. Off the Otter went again and soon returned with another fish. This time the heron was more aggressive and stood above the Otter lunging at it with its long bill. The Otter, fish in mouth, stayed in the water, popping up and down as the heron lunged "you can't get me!". The fishy commotion attracted another piscivore as a Kingfisher arrived and sat on a twig surveying the Otter and heron from above. All three were in the same field of view of the telescope...a chamber of horrors if one was a fish!

As we were enjoying this scene a Raven called and approached the cliff above us. I love Ravens..they have real personality and this one certainly had attitude! It landed barking at a Griffon Vulture, standing several times bigger than the Raven. The cheeky chappy Raven looked up at the vulture and the vulture peered down at the Raven. The Raven shifted from one foot to another, looking at the vulture and calling as if to say "Who are you looking at? Want to do something about it?" It was easy to imagine the huge Griffon Vulture sighing as it looked down.."you and whose army?"
birding Extremadura Grey Heron Griffon Vulture Kingfisher Monfragüe Otter Raven