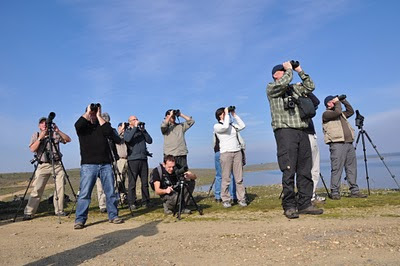 My eye caught a movement in the semi-darkness. I could just make out in the dusk that something had landed at the base of a bush, halfway up the cliffside. As I lifted the binoculars to my eyes, my assumption was immediately confirmed. Thanks to an image brighter than my own eyesight and with the magnification offered, I had found the bird that we had been waiting for. Although well past sunset, its shape and cryptic plumage was readily visible. Straightaway I called out "Eagle Owl" and the rest of the group followed my directions to find it. Normally when one considers binoculars for very low-light conditions one looks for as low a magnification as possible, generally seven times (7x). However, the binoculars I was handling were 12x. Now if you ask most experienced birdwatchers what they think of 12x binoculars, hands raise in horror at memories of massive pieces of equipment, barely possible to raise to one's eyes, let alone keep steady, purchased by ill-advised novices who believe that size matters. That would have been my knee-jerk response too. Well, here I was, lucky enough to be taking part in the international launch of Swarovski's new generation of Swarovision binoculars, the amazing EL50 range. For three days some of the world's most influential birders were given the chance to test these new top-quality optics in the field, including the world's two top raptor identification experts: Dick Forsman from Finland and William Clark from the USA, the co-founder of the British Birdfair Tim Appleton and the founder of the World Series of Birding, Peter Dunne. My good friend Godfried Schreur, a guide like me based in Extremadura, and I were responsible for taking the group (see Godfried's photo attached) to a range of different habitats, offering opportunities to test the new binoculars under varying conditions, with a particular (but not exclusive) focus on birds of prey. The birds did not let us down....the white-leading edge of the wing of Spanish Imperial Eagle gleaming in the sun, thousands of Pintail, Shoveler and Common Crane, a hunting Merlin, the spring's first Garganey, both species of sandgrouse feeding in a field, Great Bustards flying low over our heads, a Great Spotted Cuckoo that simply got closer and closer, three Golden Eagles soaring together over the village of Monroy, Lesser Kestrels in glorious evening light in Trujillo.

As for the EL50 binoculars, well simply extraordinary: both the 10x and 12x surpassed our expectations. I could not believe that I was using 12x optics, they were as steady as my own pair of 10 x 42, with an image quality that was truly remarkable...Swarovski have achieved the impossible, again!
Eagle Owl Extremadura Golden Eagle Great Bustard Great Spotted Cuckoo Lesser Kestrels Pintail Spanish Imperial Eagle Swarovision EL50 Swarovski

WebdesignUSA said…
Thanks for sharing your experience with swarovski binocular. I very much pleasured after reading your post. Truly the image quality is remarkable and another good achievement of swarovski optic.swarovski el binocular
5 May 2012 at 12:05