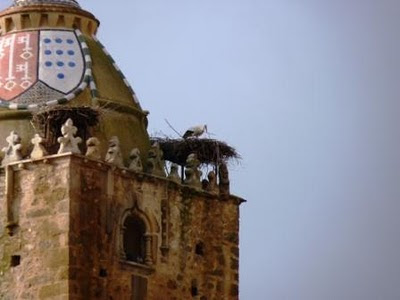 We were sitting having lunch last Friday at a pavement cafe in the main square of our local town Trujillo on Friday, enjoying a wonderfully mild day (in the garden bees have been at the rosemary flowers). Our son Patrick looked up and spotted a White Stork standing on its nest, built on a platform beside a renovated tower (see photo). The nesting storks on the tops of the old buildings around the town's square are one of Trujillo's many attractions and the souvenir shops sell T-shirts with storks depicted. However, this was 10th December. It comes as a surprise to many of our visitors when I tell them that the White Storks are back on their nests in Trujillo by Christmas, for further north in Central Europe the storks are arriving only in early spring. The fact is our local White Storks are partial migrants, with many of the adults staying here all year round and occupying nests from mid-winter onwards (indeed in the lower altitude flood plains nearby, storks can be seen on their nests throughout the autumn. Our local birds do leave their nesting areas and their favoured spring feeding areas, the nearby plains, and congregrate at large rubbish tips or in the rice-growing area in central Extremadura where they seem to feed many on the exotic American crayfish. But by mid-winter they are back, the males arriving first to take occupancy of the nest (they usually return to the same nest)and often pairing up with the first female that shows an interest. The characteristic bill-clacking echoes across the square throughout the breeding season as birds use it to greet each other on return from feeding forays.

In Extremadura we have the highest density of breeding White Storks in Spain with over 11,000 pairs in 2004, a number which seems to be increasing each year. Not all nest on buildings, indeed there are as many pairs breeding in trees and near Cáceres there is even a colony nesting on top of large granite boulders.
Extremadura White Stork