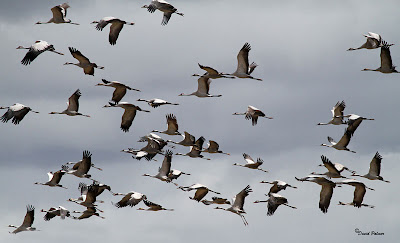 This weekend saw the second Crane Festival in Extremadura, organised by the government (the Junta de Extremadura) and held at the Crane Information Centre of Moheda Alta, right within the most important region in Extremadura for wintering Common Crane, indeed the largest concentration of crane in the whole of Spain. Through guided excursions, activities for children, lectures as well as an opportunity to enjoy local food and watch folk dances, the idea is to celebrate the winter spectacle cranes here and to further increase the awareness of both local people as well as visitors from many other regions of Spain of this wonderful bird. The cranes themselves do their bit. Travelling around the area over the weekend there can hardly have been a moment when the evocative trumpeting of the cranes could not be heard or there were not parties of cranes in the sky (see the attached photo taken by a guest David Palmer). They formed a continuous background for us. My job was to take groups of visitors out on walks and bus trips to see cranes and other local birds. The only challenge was the weather (Sunday was particularly wet and windy) because the birds themselves were magnificently obliging. Flocks of hundreds of cranes beside the road..several thousand at a roost, their forms taking shape as the sun rose in a stormy sky and their bugling reaching crescendo as they set off to feed, superb formations of cranes heading to roost against a backdrop of the mountains. We also saw several Black-winged Kites and watched Black-bellied Sandgrouse feeding close-by. On a midday excursion, we unfortunatley hit a very heavy rain storm just as we started to look for Great Bustard. Finding a large flock standing motionless in a field, we two guides set up our telescopes on tripods, opened an umbrella each and our group descended two at a time from the bus to peer at the bustards before going back inside and two others coming out. An almost surreal way to show people such emblematic birds, but it will stay in the memories of all of us for a long long time.
Black-bellied Sandgrouse Black-winged Kite Common Crane Crane Festival Extremadura Great Bustard