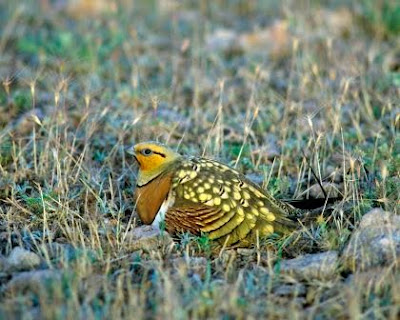 They looked at first like distant clods of earth - dark, round shapes just below the skyline. Watching them closely, one could see them shuffling around on the short sward, occasionally one rising slightly to flap its wings, a white belly and underwing catching the low morning sunlight. They were Pin-tailed Sandgrouse, a flock of probably at least 70 birds. They are very special birds, much sought-after by visitors and therefore always a pleasure to find and show to guests. They epitomise the open steppe-country for me. The wide expanse of the plains, just twenty minutes from our home, with its largely traditional mixed-farming rotation system, which allows the thin poor soil to rest for long periods is ideal for this species. They like either close sheep-cropped pasture or fallow rich in pioneer "weeds", as long as the vegetation is not too high- their short legs and necks mean that tall plants would curtail their visibility enormously. They are also quite faithful to particular areas. We found our first group of the day feeding at the top end of a field. Our second group we saw first in flight, almost Golden Plover-like, with rapid beats of rather long-pointed wings interspersed with characteristic long glides as the birds wheeled, turned, rose and descended. Typically this flock (numbering almost a hundred birds)stayed together at the beginning and then split up into twos and threes heading off in all directions. As they fly many were giving their characteristic gull-like call, which is far-carrying and a excellent way of locating their presence. The pin-tail (long central tail feathers) are hard to see on the ground, showing best when the bird is in flight. It is a gorgeously-coloured bird, with a rich orange breast and beautiful markings on the upperparts, as this picture by John Hawkins shows. The third group, also at least 70-strong, we found feeding on a grassy slope, close to the road at the end of the day, the winter afternoon light picking up the plumage gloriously. With a grand total of the day of perhaps about 250 sandgrouse, this must have been my best ever day for this species, especially with the prolonged and evocative views as we had enjoyed, a centrepiece for a really enjoyable day of winter birding in Extremadura.
birding Extremadura Pin-tailed Sandgrouse steppes winter