An exuberance of eagles 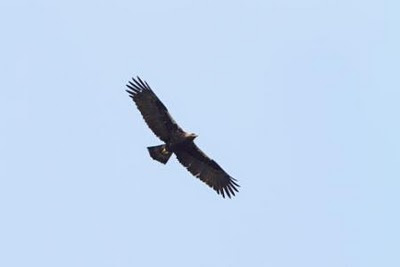 There is nothing really quite like it. A sighting of one of our three big resident eagles species always, always brings excitement. Extremadura is one of the best places in the world to see eagles. The powerful and evocative Bonelli's Eagle (about 100 pairs here) I have mentioned several times in previous blogs, simply because for me it captures the spirit of remote, rocky valleys. The Spanish Imperial Eagle (see John Hawkins' photo) with about 50 pairs is noisy and combative, often seeking the opportunity for a tussle with a vulture. But it was the Golden Eagle (with about 125 pairs in Extremadura) which stole the show this week. The biggest of all three of the these resident species, it roams across large territories over the plains and mountains. The vast open spaces typical of Extremadura provide great hunting habitat.

It was a breezy mid-November day, with the clouds breaking from time to time to bring sunshine to the steppes. We had already seen a distant pair of Golden Eagle earlier in the day, but at our lunch spot we enjoyed watching a juvenile bird flying low across the terrain, its bright white wing flashes and base of tail contrasting strongly with its dark brown plumage. Just minutes later an adult Golden Eagle appeared, lacking the white markings and showing its diagnostic golden nape. It was not interested in the presence of the younger bird. Instead, it flapped upwards, gaining height until right over our heads. Then it did a somersault, so it was belly up and head down and then stooped in a great dive straight towards us. It then curved upwards again, the sheer momentum carrying it skywards to perform yet another somersault and dive. We were witnessing the Sky Dance of the Golden Eagle and this bird was truly performing with extraordinary exuberance. A third time it swooped up, flipped over and dived. We were mere onlookers (albeit ecstatic ones), this bird was performing for a different audience, its mate, which hung high in the sky, a stationary form. Not for the first time I reflected on how in contrast to our grounded two-dimensional perspective of the great dome of the sky, the eagles exploited and explored this space..they were truly in their element.
Bonelli's Eagle Eagles Extremadura Golden Eagle Martin Kelsey Spanish Imperial Eagle