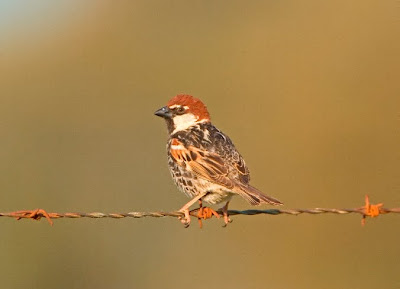 On Friday I completed the fieldwork for my allocated survey areas in eastern Extremadura for the Spanish Winter Bird Atlas. As I wrote in my blog of 22nd December, this has been a magnificent way over the last three winters to get know parts of the area that I had rarely visited before, or to explore beyond my regular routes in those patches which I know well. I used the internet to plan routes along little-used paths and tracks and then headed out for a good six hour hike (or slow walk actually) to record every individual of every species of bird detected in the course of 15 minute-long transects (whilst recording habitat type as well). Such were my atlasing days in the field.

The areas that I was assigned to cover included pretty much a good cross-section of the local landscapes: plains, open woodland, scrub, rice fields, olive groves and orchards, uplands and a couple of small water bodies. We will have to wait for the book to be published by SEO (the Spanish Ornithological Society) to see the results and analysis in full, but I have had some fun just adding up my figures.

Over the last three years, I did 420 transects, i.e. 105 hours of formal observation time. On these transects I counted an amazing 34,857 individual birds of a total of 129 species. We also had the chance to note down species that were not detected during the formal transects, such as during other visits to the area, so there were other species like Alpine Accentor, Black Wheatear, Penduline Tit and even Wallcreeper that I found in the 10-km squares but they do not appear in these species lists of formal transect data.

Just taking a quick view through my data shows up some nice habitat associations: where there are olives there are lots of wintering Blackcaps (in such areas Blackcaps are one of the most numerous birds), but they are much less common in other habitats, nevertheless a total of 571 Blackcaps were recorded. I found 610 Robins, 419 wintering Chiffchaff, 358 Corn Bunting and 177 Hoopoes!

But beyond the numbers, I have a rich collection memories from my winter atlasing..birds that I had never before found whilst birding in my area of Extremadura like Fieldfare and Woodcock. Others were birds that the fieldwork gave me a much better sense of their true status here: Bluethroat in the rice fields, Bullfinch (which is a rare wintering visitor (I recorded five individuals, in areas which I had no idea they were present). The key to this was that I was on foot and covering large areas of habitat in forensic detail. And then there are the spectacular sights: the close encounter with Bonelli's Eagles as describd in my blog of 4th February, Golden Eagles mobbed by Ravens, Lesser Spotted Woodpeckers drumming on adjacent telegraph posts, testing the different parts of the structure to get the best resonance, Firecrests hovering amongst the foliage of cork oaks..........