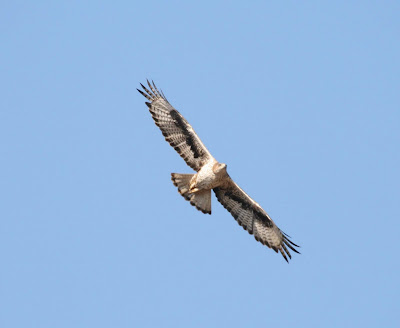 It was half past one and I had been walking for four and half hours in a remote area of eastern Extremadura doing some fieldwork for the Winter Birds Atlas. I was in a quiet valley, quite wide, with scrub-covered slopes, some rocky outcrops and a strip of alder gallery woodland (full of Siskins) beside the river. This I thought to myself looks good eagle habitat. Just a few minutes later, I heard a loud whooooosh and an object whizzed past me at great speed just a few metres away and close to the ground. My first split-second reaction was that it was a hunting Goshawk, but as I got my binoculars on it, its true identity was obvious: a Bonelli's Eagle. It pounced onto a Red-legged Partridge on valley slope nearby. The partridge flew up, but then a second Bonelli's Eagle arrived, at the same speed as the first, and had a go at it. The eagles had appeared out of nowhere and had been completely oblivious of my presence, so focused were they on their prey. I was simply very close to the end-point of their almighty stoop. It got better. The first eagle flew up from the vegetation and headed in my direction to land on a small pylon barely thirty metres away. Once perched only then did it notice me. For a minute or so it seemed uncertain over what to do, then it flew to the next pylon away, where it was joined by its mate (without the partridge...which presumably got away). The two sat there in the sunshine and then one-by-one flew off, passing low and close to me, giving me, as it were a disapproving look, before slowly gaining height and circling together well above the outcrops. They are truly magnificent birds, my favourite of the eagles, whose shape just spells power and whose presence epitomises rocky, wild areas. They are called in German the Goshawk-Eagle, in Spanish their full name means the partridge-hunting Goshawk-Eagle. They are strategic bird hunters, often working as pairs (I have seen them as a pair ambush flocks of Wood Pigeons, performing perfect pincer tactics), with the female significantly larger than the male (normal with raptors, but especially so amongst the bird hunters such as Merlin, Peregrine, Sparrwohawk and Goshawk).

The experience left me exhilarated, so much so that wading the numbingly icy river a few minutes later was easy...my head was just full of this close encounter, which will remain forever as such a vivid memory. The photo attached was taken last spring by a guest of ours. Mark Mallalieu.
birding Bonelli's Eagle Extremadura