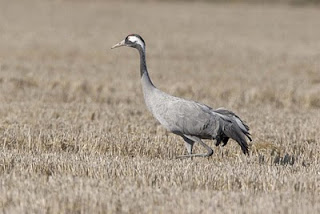 Normally in mid-winter here we can expect some rain, but also long periods of settled fine weather which is a real joy to be out in - especially good for getting sightings of displaying eagles. This year however, we have had rain for almost every day over the last three weeks. I have just completed taking two guests, Peter and Vana, out birding for five days. We have had gale force winds, storms, torrential rain. Never before have I had to resort sitting in a steamed-up car to have lunch on one of these trips: we had to do it twice! Roads have been flooded, rivers are at full spate and the amount of standing water in the fields has been amazing.

For a guide under these conditions, one faces the prospects with some trepidation to say the least. Effective birding time is severely reduced and some birds will be very hard to find. Fortunately the local weather forecast was accurate enough for me to plan the itinerary to fit in with what the weather would throw at us: it is best to be in open-country (the steppes and ricefields) on the worst of the days, pick Monfragüe for raptors when there is a chance of some sunny spells, even if it will be very windy, and avoid woodland until the best day when the wind is low and it is not raining hard.

Overall it worked and even though we missed a few species, we did much better than I had expected. The good thing about guests from the UK is that they do not mind being out in the rain and we were all well kitted out. The highlights? Crane numbers at their mid-winter peak (we must have seen well over 10,000 in one day), the largest number of winter Grey Lag Geese that I can recall, three fine Ruddy Shelduck (origin unknown), good numbers of Little Bustard, groups of Great Bustard, big flocks of Pin-tailed Sandgrouse, excellent views of Bonelli's and Spanish Imperial Eagle, lots of Marsh and Hen Harriers, a stunning male Bluethroat, Purple Swamphen, masses of Lapwing and Golden Plover, some Curlew (which are very uncommon here), exquisite views of Firecrest, superb views of Black Wheatear, overwintering House Martin and Barn Swallow, two Otter sightings and, what is always a wonderful feature of wintering birding, the sheer numbers of small birds: Corn Bunting, Calandra Lark, Skylark, Chiffchaff, Spanish Sparrow. But for all of us what was probably the most memorable sighting occurred on New Year's Eve. There was a gale blowing and we had stopped at a small reservoir on the plains. A more exposed place you could hardly imagine. At the inlet of the reservoir there is a small patch of reedmace ("bulrush"), many with seed heads which were being tossed around in the wind. I heard the thin call of Penduline Tit, but assumed that under these conditions, anything more than a fleeting glimpse would be out of the question. It flew from close by and dropped into the vegetation. That's our view, I thought, but still checked the area carefully. Unbelievably, this remarkable little bird was relocated at the top of a swaying seed head, happily feeding away. What is more we got our telescopes onto it and were able to enjoy fabulous views. It then moved to another seed head, we found it again in the 'scopes amd then realised that on an adjacent plant there was a second Penduline Tit. They are great birds to see at the best of times, but under these conditions, these views are some which I will never forget.
birding Bonelli's Eagle Common Crane Extremadura Grey Lag Goose Penduline Tit Pin-tailed Sandgrouse Ruddy Shelduck Spanish Imperial Eagle winter