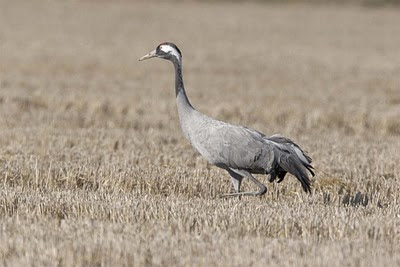 Even by Extremadura standards, the last five days have been hard to beat in terms of sheer birding excellence. It has involved some very different approaches to the art: two days of Winter Atlas survey work meaning walking and recording the number of individuals of every species encountered, two days of guiding where success is measured by the "wow" factor from one's clients and a few hours on the fifth day of simple birding - in this case going through a flock of wintering geese.

The systematic atlas fieldwork yielded no fewer than eleven wintering Bluethroats in the space of an hour and a half, including some very smart males. There were interesting records of waders such as ten Curlew, 70 Avocet, 700+ Dunlin, raptors like Merlin, Golden Eagle, Hen Harrier and fascinating totals like 98 different Chiffchaff seen on my walk through the rice fields. In the woodland, on a bitterly cold morning, the very first bird seen was a female Lesser Spotted Woodpecker, followed by a singing Woodlark, followed by a Kingfisher! I kept bumping into Firecrests and later on I found a flock of 40 Cirl Bunting.

I was able to show some of the Bluethroats to our guest, Mark, as well on our first day together the huge flocks of Cranes and Grey Lag Geese. We saw a Great Spotted Cuckoo, a group of about 40 Little Bustard, Black-bellied Sandgrouse, Red-crested Pochard and copulating Black-winged Kites. The second day started wonderfully with a fine flock of thirty Great Bustard standing on the skyline of a field with the spectacular backdrop of the snow-clad Villuercas mountains and the castle of Trujillo. The area also yielded 70 Pin-tailed Sandgrouse, another Great Spotted Cuckoo and two Merlin. We then headed to the Monfragüe National Park, seeing an overwintering Black Stork en route. At Monfragüe both Griffon and Black Vultures were finding weak thermals near the massive cliffs beside the River Tajo, we got great views of several Hawfinch and were joined at lunch by hungry, inquisitive Azure-winged Magpies. But pride of place must go the superb spectacle that we enjoyed in the winter sunshine, watching a pair of Spanish Imperial Eagle at close range, performing their aerial courtship, collecting nest material from the hillside and being mobbed by a pair of Ravens - until the tables were turned and the harried eagle divebombed the corvid! At one moment the pair were joined in the sky by a juvenile Imperial: three in sight at the same time.

Then today, for an hour or so I took myself down to the embanked pool at Casas del Hito, at the edge of the ricefields. The purpose of this was to try to find the Cackling Goose (also known as Richardson's Goose) which had been found earlier in the month and had been seen again last Sunday. It is the second record for Spain
(see http://www.rarebirdspain.net/arbsr000.htm#Brahut)
and for me a lifer as well. Luckily a good number (about 500) Grey Lag Geese were swimming on the pool (there were also several thousand more feeding on adjacent rice stubble). I got myself into a good position to scan the flock and the light was perfect. After about ten minutes, I found this attractive small goose. Very distinctive, shorter-necked than a Canada Goose, with a steep forehead, and small dark bill. The cheek patch seemed to have a slight buffish wash, indeed the whole plumage had a warm tone. After having some excellent views of it, I continued to check through the geese and found three Greater White-fronted Geese, a rare visitor which had not been previously reported this winter. Pleased with both these sightings I started my return home, stopping to look at a group of waders on a paddy: four Wood Sandpiper, with a further six on the next field. They must be overwintering birds, I guess, and very unusual.