Visitors to the garden 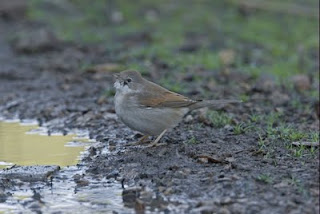 Here we feel that autumn has arrived by the middle of August. It is still hot and sunny (maximum temperatures here will probably be in the thirties every day for next week or so), but the nights are lengthening and there is a freshness at dawn. Providing most evidence for the change in season are the birds. Last month in a blog I described the start of the autumn wader passage. On a my most recent visit to the rice fields nearby, there were small numbers of Little Stint now featuring amongst the Wood Sandpipers and Ruff, as well as a party of very early Common Snipe. Bright yellow juvenile Willow Warblers were foraging in the bushes, along with Sedge Warblers: both passage species here.

But the autumn passage is also visible much close to home. Because of the drought this year, the garden (watered from our own bore-hole) has become a little green, moist oasis. Almost exactly a year to the date of making a first-ever appearance on the garden-list, a Western Bonelli’s Warbler has again been around the garden. This attractive little bird nests in Extremadura in higher zones in the mountains: who knows whether this special garden visitor hails from local populations or from further north. What is certain is that it will be here just for a few days, before continuing its journey southwards. Today a Common Whitethroat was also present, a new species for our garden. Puddles on the path bring a wonderful medley of thirsty birds: Hawfinch, Short-toed Treecreeper, Blackbirds, House Sparrows, Azure-winged Magpies and Nightingales. Sitting at first light, binoculars at the ready, a mug of tea on the ground beside me, wondering what migrant visitor may make an appearance today – a great way to start the day!
Common Whitethroat Hawfinch Nightingales passage migrants Short-toed Treecreeper Western Bonelli's Warbler Willow Warbler