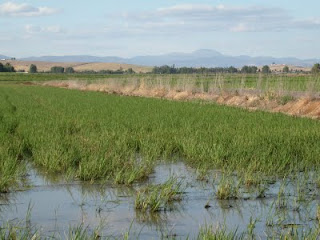 I was away in the UK for a week to attend the amazing British Birdwatching Fair at Rutland last weekend and stay on a few days so see my parents in Norfolk. It was two evenings when I got back home, finding Extremadura as hot and as dry as I had left it. Such high temperatures so late in the summer are unusual. This morning I headed again to the rice fields to see how the wader passage was doing. Getting the best of the morning always requires a flexible strategy, because fields that were muddy and damp on my last visit, may be overgrown this time and much less good for birds, whereas unproductive areas previously may spring surprises. So it was this time, with fields which had been thronging with birds a month ago, now hardly worth more than a few minutes checking. The best area was the large pool, surrounded by an embankment. There was very little water, but the flashes that were there had a quite a good selection of waders: a couple of Temminck’s Stints, some Little Stint, Dunlin, Wood Sandpiper and Kentish Plover. A single Collared Pratincole remained. On the embankment, the sparse vegetation was thronging with Willow Warblers (passage migrants here). I counted no fewer than six preening on a small bare tree. Calls of Nightingale and Great Reed Warbler came from denser growth. Several juvenile Woodchat Shrikes were also around. I looked down from the embankment onto a rice field which had some small open areas, watching foraging Little Ringed Plovers, along with a Yellow Wagtail and a Tree Pipit. As I returned along the stony tracks, a small party of Short-toed Lark flew up in front of me whilst further ahead were two juvenile Montagu’s Harriers, sitting on the ground at the edge of the track, distinctive with their orangey under parts and pale border to their facial discs. Groups of Bee-eaters were lining up on the fences. Friends tell me that Spotted Flycatchers, Pied Flycatchers and Common Redstart are now moving through, so they are bound to start appearing in the garden any day now.
autumn passage Bee-eaters Montagu's Harrier Temminck's Stint Waders Yellow Wagtail