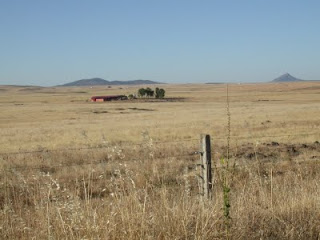 The hot settled weather continues and in parts of Spain the extremely dry conditions have created a tinderbox. Big fires have been raging in eastern Spain and here in Extremadura there have been serious wildfires in the woodlands of the Hurdes, in the north-east. Yesterday a pall of smoke was discernable in the sky and a faint smell of smoke. It probably came from fires about 60 or 70 kilometres away. It has been an extremely dry year. The spring rains all but failed. The dry vegetation is significantly lower than last year. Very dry springs and summers here can have an impact on the birds. Little Bustard, for example, have very poor breeding seasons in dry springs. A friend of mine has over 30 White Stork nests on a ruin on his property. This year, for the first time ever, many pairs seemingly abandoned their young, about two weeks before they were ready to leave the nest. Some perished on the nests, whilst other youngsters flew to the ground, where they were seen drinking water from the dogs’ bowl. My friend managed to catch some of these young birds and contacted an animal rescue clinic to collect them. They arrived with their vehicle already almost full o boxes containing young storks. Clearly the phenomenon appears to be quite widespread. The reason seems to be that the parents abandoned young birds because they could not bring enough food to the nest. An important part of the storks’ diet at this time of the year is grasshoppers. This year grasshoppers have been very scarce, largely because of the drought. Normally there will be huge numbers on the plains, attracting Buzzards, Black Kites, Montagu’s Harriers, Lesser Kestrel, Ravens as well as the White Storks. I suspect that all of these species have had a hard time this year.
Martin
Black Kite Lesser Kestrels Montagu's Harrier raptors Raven summer White Stork