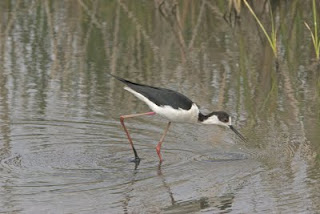 Welcome to my blog and share with me, through the seasons, encounters with nature in Extremadura, as well as life and culture in this very special part of Wild Spain.

Yesterday I did just that, making a dawn visit to one of my favourite areas: an area of rice fields, beside open plains and dehesa (the famous grazing woodland) about twenty-five minutes to the south of our house. I try to visit the area as often as I can, which usually means not as often as I would like. It never disappoints, there will always be something of interest there.

As I approached the area, in the dusk of first light, a Black-winged Kite sat on a wooden electricity post beside the track, a crepuscular hunter so dawn and evenings are the best times to see this species. Once beside the paddy fields, I looked for those with sparser growth, especially with exposed mud. The first thing that struck me was the huge number of Black-winged Stilts. In the course of the morning I estimated that there were over 700 present (one field alone had over 400 in). As I looked more closely at them I could see that they included good numbers of young birds, some of them with much shorter legs and bills, clearly birds that had fledged in this area. I was also delighted to find two broods of Lapwing. This is a common winter visitor in Extremadura, but numbers were also building up at this site in early summer and seeing these chicks proved my suspicion that some had bred here. On a more distant field over a hundred Black-tailed Godwit fed, along with a few Ruff. Other migrant waders were dotted around such as Wood Sandpiper and Spotted Redshank. There were also young Collared Pratincoles seemingly everywhere, especially fond of sitting on the track in front of me. I left the car and walked along the bank of a small dam, which had very little water and a lot of exposed shingle, ideal for Ringed, Little Ringed and Kentish Plovers. On the edge of the shingle beach juvenile Gull-billed Terns waited to be fed by their parents. The rather sparrow-like chattering call of a Melodious Warbler revealed its presence in a willow beside me.

Looking down from the top of the bank onto an adjacent muddy field, I checked through another group of waders. A Green Sandpiper was feeding out in the open, and as I watched it, noticed that it was surrounded by other, smaller waders. They were adult Temminck’s Stints, a party of nine, and they were a delight of watch as they bobbed past the tufts of vegetation in the soft mud, looking like long sleek, miniature Common Sandpipers.

I have visited this site so many times, but still am over-awed to see the selection of waders on long-distance migration from high latitudes to the wetlands and coasts of the African tropics and sub-tropics, that fly across the interior of Spain finding stopover sites such as this one.
Black-winged Kite Collared Pratincoles Lapwing Waders