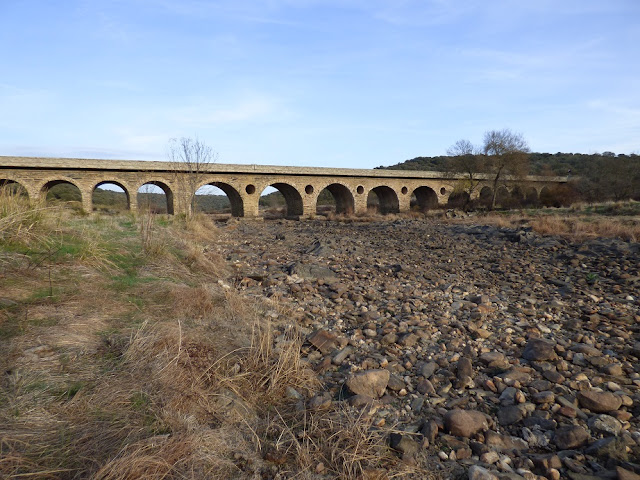 The photos speak volumes...comparing the River Almonte in a normal autumn (this particular image is from 2015) with its sorry state this year. That joy that embraces all of us who live and work in the countryside of Extremadura as the autumnal rain arrives has been denied us this year. We have been robbed of an entire season, our second spring, that always brings such a sense of recovery after the summer and a more dramatic transformation of the landscape than is ever bequeathed in March and April.

There were false dawns that teased us. We have had three days with rain but separated by long anticyclonic lulls, and prematurely I wrote that autumn had arrived. In our sheltered hillside microclimate at home, yes indeed the land has slowly greened, but as soon as I venture onto the thin-soiled steppes, my demeanour changes and anxiety beckons. Those glorious golden summer tones of sun-dried grasses in the dehesas have senesced to a weary grey. Where sheep have grazed there are fields with barely a stem remaining, just trampled earth and sprays of droppings. Trucks are doing thousand-kilometre roundtrips from the north of Spain to bring hay and straw as emergency feed for livestock, so that the fields are freckled by yellow circles of trodden forage. It must be horrendous for farmers. All of us who sow, plant and harvest share now a feeling of misgiving. It is hard to think of any winners in this drought, perhaps just the vultures which exemplify the silence as they wheel over the ridges.

I stood beside the dried-up course of the Magasca River: lifeness dulled stones, lying months now without the smoothing wash of water. Below me was a tiny stagnant pool, coated by a film of algae whose surface was lined by the record of riffling gusts of wind brought along the narrow valley. Were there still any fish there I wondered. What happens to the barbel in years like, a bottom-feeding fish favouring the clean gravels of moving water? And what happens to the Otters? Ripples spread across the algae from the base of the rock beneath me and from its side emerged the sleekness of a fish-hunter. Thrice the Otter dived and crossed the river's relict pool, each time fruitlessly. It then came out onto the opposite bank, shook itself and moved, arched-backed, across the dried pebbles and up onto the withered bankside vegetation. It headed east (what was "upstream"), disappearing from view as valley turned, doubtless to visit the next marooned pool. It must travel many kilometres each day.


Cormorants it seemed were faring better. The great rivers of the Tagus and Tiétar have their waters damned a several points, and their levels are managed to meet the demands of power generation. Our reflective pause beside the Tiétar was rent by the whoosh of over six hundred Cormorants, urgently flapping just above the water surface, some crashing into the surface. their bow-waves brimming, whilst others, changing their minds, slapped the surface with webbed-feet spread. In counterpoint, both in sound and colour, were a supporting guard of at least twenty Great and Little Egrets. As the Cormorants arranged themselves on the river, so the egrets landed at selected points at the water's edge. Half a dozen Grey Herons took up the rear, one coming to rest in the middle of the river itself, swimming beside the Cormorants as they detected a shoal and started diving. We too, like the egrets, found ourselves following the Cormorants. The egrets were after the fish, flushed by the frenzy to the banks. We were after the visual, an encounter between fish, cormorant and opportunistic egrets, to which we, as passive observers, could relish - a counterpoint too for the enduring drought.
autumn Cormorant drought Great White Egret Grey Heron Little Egret Otter River Almonte Tagus