Dragons in the heat

July 20, 2016
The tussocks of rushes were armoured as porcupines, with their quill-like pointed leaves painfully pricking my bare legs as I entered the edge of the marsh. Fortunately I did not need to walk far, as the creature that I had disturbed on my arrival was soon back on the same perch, a fine male dusky blue Long Skimmer Orthetrum trinacria. This elegant dragonfly was first recorded in Spain in 1980, but is widespread in Africa and where I was standing is one of the best places I know for it. It remained perched, and I stood in silence, taking in its slender dark form, set between the two pairs of intricately venated wings. All the time it was moving its head, the thousands of facets in its compound eyes checking for movement in all directions. And then it sped off, unhesitant and direct. I tracked it with my eyes and watched as it darted between and around the tussocks, sometimes rising, but generally keeping on a fixed horizontal, before returning again to the same perch beside me. As I raised my vision and looked across the flank of Juncus that lay between the Typha marsh and the meadow, other Long Skimmers were active, making patrols or executing swerving chases. Some were these dark blue males, but many were females, sporting bright bluish eyes and patterned abdomens. Indeed were it not for the dragonflies on this late morning in the deadening heat of mid-July, there would have been little else on offer. Whereas a month earlier, standing at this same spot, I was listening to the steady incessant see-sawing begging calls of Purple Herons, these youngsters have now dispersed, leaving an almost smothering silence, save for the occasional ejaculated toy-trumpet blast of a Purple Swmphen or the yakking of a Little Bittern, hidden in the vegetation. It was only when I left that I saw the Squacco Heron that, like me, had been standing motionless at the edge of the marsh. 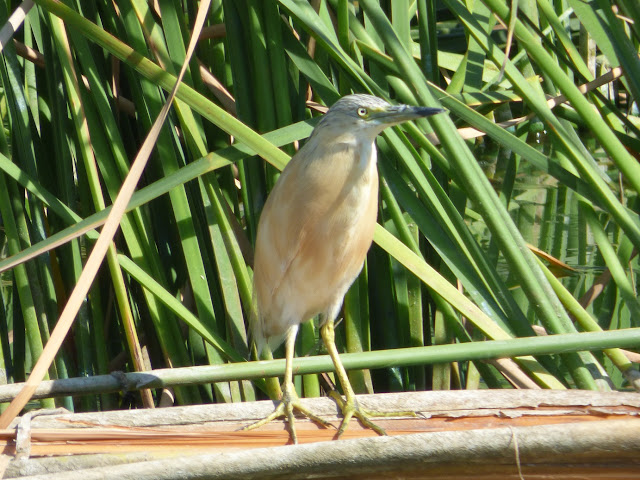 To the north the plain was crossed by the Tiétar River, flowing fast between vast banks of sandy gravels, with a gallery woodland hiding from view the hinterland of fields of tobacco, doused by Tiétar water from rows and rows of sprinklers. Here my son, Patrick and I simply stood at the water's edge and without effort, watched dragonfly interactions: a Small Pincertail Onychogomphus forcipatus periodically leaving its stone to chase off Epaulet Skimmers Orthetrum chrysostigma, and absorbing the behavioural differences between species as they fitted together in defined niches along the river. Restless Broad Scarlets Crocothemis erythraea were patrolling a section of the littoral, constantly on the move. In complete constrast and rather unobtrusive in comparison were the patient Violet Dropwings Trithemis annulata. These gorgeous arrivals from Africa (like both the Long and Epaulet Skimmers) were perched on dead twigs overhanging the water, their wings dropping low below the line of the body and the high ambient temperature encouraging them to obelisk their bright violet abdomens almost vertically.


From the Tiétar valley the road took us higher and the dehesa landscape subtly changed in tone as evergreen holm oaks were replaced by deciduous Pyrenean Oak with softer lime-green leaves. We stopped beside a small charca, a drinking pool for cattle, but today with just a motionless White Stork standing on the bank. With the temperature now in the high 30s, a party of Common Swifts had descended to drink and they did so oblivious to our presence. Their wings slapped the heavy air as they manoeuvered their precision swoops and so close were they that we could hear the scoop of water as their open gapes scratched the surface of the pool. Here the rushes were gentler, combing rather than pricking our legs and skimmers too were present: large Black-tailed Skimmer Orthetrum cancellatum females ovipositing, rhymically dipping their abdomens into the water as they hovered, whilst a male kept guard.

At the edge of a small town at the base of the Gredos Mountains, in an area known as La Vera, we made brief stop to check a small stream passing between a series of allotments where peppers and tomatoes grew in tidy rows. Close to the water there was no sign of any dragons, but in the dappled shade of the foliage above the path we watched the delightful semaphore displays and graceful fluttering of a cluster of Copper Demoiselles Calopteryx haemorrhoidalis, their broad-wings constrasting with their narrow, delicately gleaming metalic bodies.


We found a small garganta (the name given to rivers coming down from the mountainside) and stopped at a place where we could scramble down to reach the massive water-smoothed granite boulders, where the river combined sections of rapids with transparent pools of deliciously cold water where small trout drifted. A Dipper paused briefly, bobbed and whirred off downstream. The hillside was clothed by Pyrenean Oak and at last we could hear the sound of birds: Golden Orioles and Blackcap. The bark of Ravens pulled our view skywards, just in time to see a juvenile Golden Eagle being harassed by three cross-shaped and persistent corvids. Higher up a Honey Buzzard drifted across our view. By our feet there was movement. A Large Pincertail Onychogomphus uncatus had settled on a small round rock, its abdomen slightly raised and casting a crisp shadow on the smooth surface of the stone. It paid no attention whatsoever to us, instead treating us to prolonged observation of it perched, interspersed with its sorties to check its domain.

Over a couple of days, in an entirely relaxed fashion we had found 21 species of dragonfly and damselfly. We had made, in effect, a small albeit unscientific transect across part of the Tiétar basin. We could easily have found others through a more systematic approach, but for me the reward came from patient and quiet observation. We built a picture, or more accurately a simple sketch, of not merely presence but also being, of niche and behaviour. It was a gift for the curious.

Jack said…
Now this is some good information about dragons, I need to keep this post save with me as it can be handy at time. Thank you for sharing it
19 August 2017 at 07:43