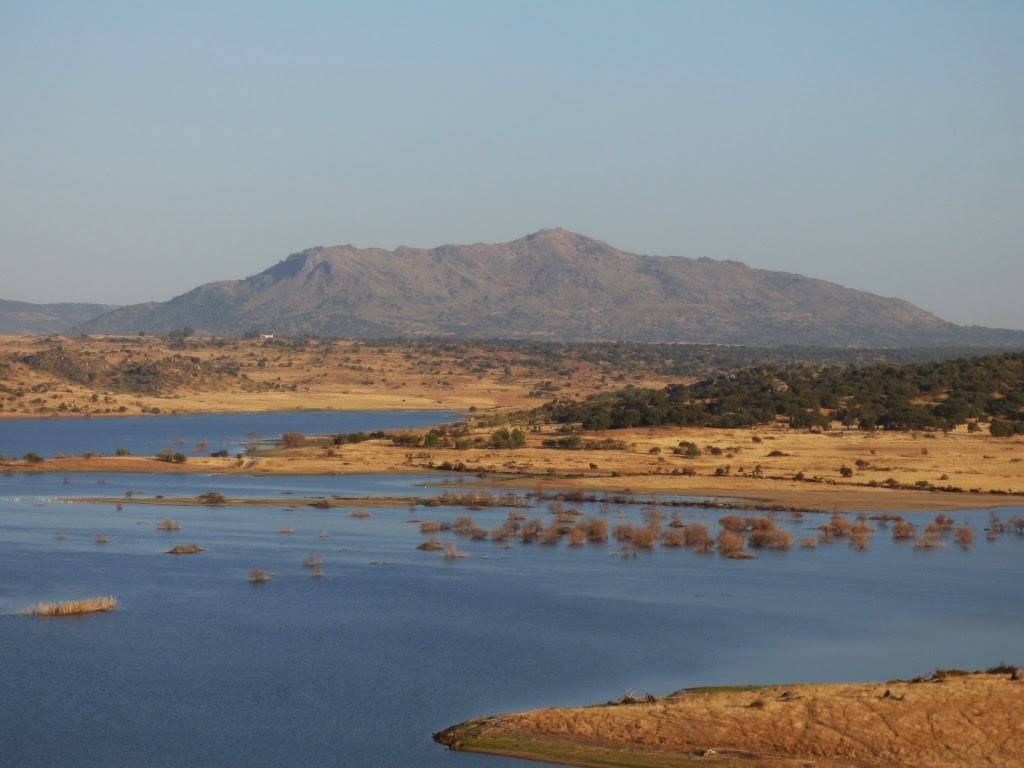 The sun has not risen above the ground behind me and the dry grassland in the immediate foreground still has a dawn gloaming greyness. Beyond this umbra, the day is already starting with the slope on the other side of a now dry watercourse boasting a golden hue. It is the end of August and whilst the days are hotter than they have been at any time this summer, the nights are lengthening. I stand in the freshness of a late summer dawn and it is almost eight in the morning.

I watch the parched meadow in front of me gradually change tone as the front of light advances. Then a distraction. From an unseen spot to my left a shape takes off and crossing my vision passes the massive silent form of an Eagle Owl. It flies in the mountain's shadow, low above the ground with rather deep but slow wingbeats, almost gentle rather than forced, but oozing power. It settles for a few minutes, again out of view in a gully before taking off to find an exposed perch, on the bank beside the very track I am following, ahead of me. There it stands, attracting two mobbing Ravens, which it ignores. Instead it looks directly at me, its ember-like eyes in a fixed stare. I reciprocate. But disdainfully, it twists its neck, looks away  into the dehesa and in an instant it has disappeared into the holm oaks.

I continue to look at the spot at the top of the bank. Moments like this are rare and it takes a few minutes more to fully absorb the experience. Eagle Owl encounters are held in memory for life.

I was visiting a brand new reservoir, just twenty minutes from home. The dam is almost complete - with just some finishing touches remaining and the water level had been slowly rising through to early summer, but there is still some way to go until we can get some idea of what it will look like at full capacity. What has been remarkable is how such a new site has been found by birds. As the picture above show, the tops of small copses are still visible and strandline is still quite vegetated in parts. But particularly striking on each of my visits over the past few months has been the concentration of grebes (today I counted 315 Great Crested, 220 Little and 13 Black-necked Grebes) and Spoonbills, which have always been in double-figures. I am eagerly looking forward to the winter to see how the numbers and species composition of wintering duck compare with the longer-established reservoirs nearby, such as the Sierra Brava reservoir where most winters 40,000 or more duck congregate. Today there were just a few hundred duck, all in their late-summer eclipse plumage and almost all of them Mallard, mainly of the local breeding population. However, some migrant duck are passing now through. Yesterday I found a Garganey (see photo), also in eclipse plumage, on a small gravel pit, followed by two others at another small pool. These are birds on their way from eastern Europe to tropical Africa.

But evidence there was of autumn passage today as well as I stood under the shade of a small holm oak to count the grebes. A sharp clicking call from just above my head came from a Pied Flycatcher, my first of the autumn. It was clearly aware of my presence, but also highly reluctant to leave the shade and foraging opportunities that this single tree offered. I gave way and slowly withdrew: it had travelled far further than I had.
Black-necked Grebe Eagle Owl Garganey Great Crested Grebe Little Grebe Pied Flycatcher