And how the year begins..

January 11, 2014
We had been away over the Christmas holidays and after such an absence, as we all do when returning home, there is the routine inspection that all is well. For a gardener and a naturalist, this extends beyond the house and its fittings. As soon as I could I was down to the vegetable garden where the rains, which had started the day we left and finished the day before we got back, had brought on the germination of my very tardily sown broad beans. Where shoots had just started to show in a few places before Christmas, there now stood five rows of growing plants with a pretty much 100% germination. The garlic which had shown no signs of life at all now revealed themselves as a couple of rows of narrow spikes. Good stuff! Then to check the swimming pool where the first surprise of the year lurked. Sitting in a corner was a magnificent specimen of a Fire Salamander, the first I had ever found in the garden (see above). I fished it out and summoned the family. Patrick provided the scale to the photo below. 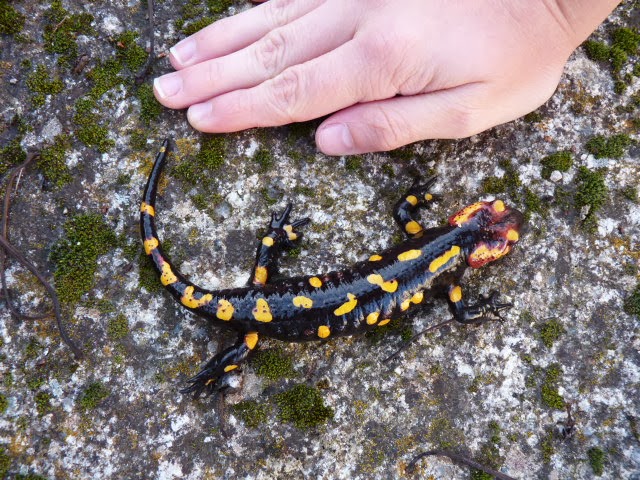 As is typical of the species, it was incredibly slow moving, taking each step in a precise, laboured fashion, one leg at a time, rising to mark out a circle in the air and then pushing against the earth to provide a modicum of propulsion. A sign of recent mild and wet weather.

A White Stork had arrived and taken occupancy of the nest on the village church - the return of the storks to their nests atop towers marks the turn of the year here, so perfectly on cue.

The next morning, anxious to check one of my favourite haunts, I left the family sleeping as I went off to steal a few hours on the rice fields. There was a significant ulterior motive as well because whilst on holiday a friend had phoned to say that he had found an unusual wader and wanted to check some identification features. It turned out to be Extremadura's second-only Lesser Yellowlegs, a rather dainty North American vagrant to Europe. However, no one had seen it since its day of discovery in late December. I followed tracks in the general area where it had been found. Many of the paddy fields here had been ploughed and were wet and muddy, absolutely ideal for waders, but finding an individual bird in this great expanse was going to be a challenge. The presence of a couple of Curlews (unusual here), 25 Spotted Redshank and over 500 Dunlin in one area was promising, but as I checked carefully there did not appear to be any other wader present. I moved on and explored another track, beside which was a rice field with a small group of Greenshank foraging actively at the far end. As I stopped to watch these, a smaller wader came into view. Its slender structure and bright, long yellow legs betrayed its identity immediately: the Lesser Yellowlegs had been relocated.

Less of a surprise but equally pleasing was our find this morning out on the plains near Trujillo. We have enjoyed truly spring-like weather and the morning was still, sunny and mild. Clouded Yellow and Small Copper butterflies were on the wing, and the surroundings were filling up with the song of Calandra Larks. As we stood, within minutes after getting out of the car, the unmistakeable and rather flambouyant and excitable calls of Great Spotted Cuckoos assaulted us from the distance. Within minutes into view they flounced, landing on a bush and on a fence, a pair. They are invariably the first spring migrant I see each year and it is almost always too in the same location - give or take a few hundred metres. This is really how I expect each year to begin.