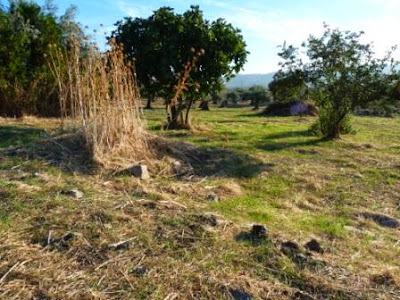 It is a more dramatic transformation than spring itself. Whereas winter gradually turns over to spring, with a stepwise succession of flowers appearing from January through to their flourishing climax in April and with spring migrant birds too coming on board from the turn of the year,  the arrival of autumn can hit one with a jolt. And we welcome this surprise guest with open arms, a herald of the closure of the seemingly unrelentless summer heat and the start of what is really for us a second spring. The transformation happens in just days, although when it occurs is totally unpredictable. It is driven by the first rain, which can happen at any time between late August to October. It only takes a few hours of good solid rain to bring about this metamorphosis. Tiny, sharp slivers of grass shoots break through the dirt and mat of dusty, parched dead vegetation. Each one barely a couple of centimetres tall, fresh and vulnerable, but in their collective mass powerful enough to change the landscape, an alchemic conversion of dry golden pastures to an emerald sheen. Autumn flowers will follow over the next few weeks but it is the all-embracing re-emergence of grass that lifts the spirit at the back-end of the year. How quickly landscape converts to a truly lush growth will depend on the rains that follow, but the switch has now been set.

My picture at the top of the post was taken a couple of days ago, in the freshness that felt like an early autumn morning. Loose flocks of House Martins wheeled in almost chaotic fashion, before finding wires to perch on, in a tight file. Unseen against the open blue sky, a Woodlark sang gently, its cadences caressing me, whilst a Wren gave some autumn song from the brambles. The garden had other sounds too, those that I only hear at this time of year: the sharp calls of Pied Flycatchers, taking their final pause before crossing into North Africa and over the Sahara.  And crossing into view was a gliding Booted Eagle, wheeling in a low, wide circle and giving its loud, rather high-pitched "chip" calls, a vocalisation which one associates much more with their courtship in spring.

The autumn migration is at full pace and the plains have staggering numbers of Whinchats (photo above) and Northern Wheatears, perched on the fences, which serve as superb vantage points to spot insect prey on the ground. These alert, inquisitive birds are everywhere. Small parties of Tawny Pipits are appearing as well, sometimes perched on the wires as well, but generally preferring to be foraging on the ground.

The Equinox happens today with the sun crossing the celestial equator and autumn starts in the northern hemisphere. It was preceded by the Harvest Moon, silvering the pre-dawn sky in which hung Jupiter in its brillance. All change in the heavens indeed, but the green shoots of the year's second spring in Extremadura had signalled this all in advance.
autumn autumn passage Booted Eagle House Martin Northern Wheatear Tawny Pipit Whinchat