Crane counts and other news 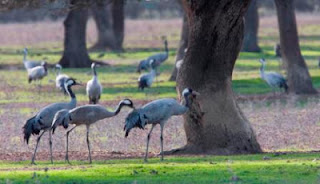 I had settled down comfortably: camp chair, warm clothing, the trunk of the great encina (Holm Oak) behind me, its evergreen canopy above, hiding me from view. I was sitting in the dehesa at the end of the afternoon, with a view of the small Tozo reservoir in front of me. My aim was to be as well-hidden as possible, the reason: to watch and hopefully count the Common Cranes coming to roost at this small water body, surrounded by the dehesa of encina, providing the acorns which the wintering cranes are sharing with the free-range Iberian pigs. One of my activities in winter is to participate in surveys and counts of birds. There are surveys too in the spring, but with our birding holiday business at its peak at that time of the year, it is usually difficult to commit time to volunteer for survey work as well. Winter is different and it feels good to be part of a band of like-minded birders, gathering information which is then pooled, analysed and contributes to our wider understanding. That day too, others were out at viewpoints to count the cranes coming into the many roosts scattered across Extremadura.

Some places are easier to survey than others. In the rice-growing areas where most of the wintering cranes occur, the lines of calling cranes can be watched approaching at a distance across the wide open skyscape. I was at a much smaller roost, sitting amongst trees because there was no accessible high ground to provide a panorama. My skyscape was gaps in the canopy.  I could hear the cranes bugling in surrounding feeding areas and perhaps half a dozen were in sight between the trees near the reservoir. There were parties of Mallard and Teal on the little reservoir. Two Green Sandpipers and a Greenshank moved along the water's edge, whilst a Great White Egret flew down from a Holm Oak to the water.

Just as it was getting dusk, there was some movement as a party of cranes flew in, gliding between the trees and settled on the pasture close to the water. There they stood. A few minutes later another party joined them, coming in from a different direction. Then another. As I scanned across my view I became suddenly aware of a different movement. In the falling light, the tall grey shapes of cranes, with their wonderful dark bustles of dropping feathers, were approaching...not flying, but slowly striding in, walking towards the roosting area with a deliberate gait. It was quite magical, like watching mystical fairytale creatures emerging from the gloom between the trees and all heading in the same direction. I sat still and watched, they were completely oblivious to my presence. As they gathered I tried to count them in the rapidly diminishing light. More and more were coming in. An exact count was going to be impossible, so I satisfied myself with an estimate of 300 birds, give or take 20. As I crept away to across the fields, back to the car, the cranes had formed a close pack and the ducks were leaving the water to graze, under the safety of darkness, between the trees.

The following day I  was counting birds for two hours along the lanes where we live on the Los Lagares hills. This is for a different survey for the Spanish Ornithological Society (SEO/BirdLife) to monitor trends in bird populations. My count joins the efforts of many others across Spain and over the years changes in bird populations can be noted. It was a lovely morning's walk, still and mild. There was even some bird song, from Chiffchaffs and the weak, faltering "song" of Hawfinch. My total on the walk was 720 individual birds seen of 37 species in two hours through olive groves and dehesa. I will repeat the exercise in January and then see how the combined total compares with previous winters. As well as the survey work, winter remains also a fabulous time for watching birds here. One lucky observer saw and photographed a White-tailed Eagle not far from here and there have also been recent records of other local rarities like Yellow-browed Warbler, Red-knobbed Coot and Pink-footed Goose. News of unusual sightings can be found on the blog of our local birding group: http://birds-extremadura.blogspot.com

News has been coming in from other crane counts across Extremadura. From the so-called Central Zone (which is largely irrigated land for rice and maize crops) a staggering total of over 61,000 cranes were counted going into the various roosts there. The overall figure for Extremadura has not yet been compiled for this year. My 300 or so at the Tozo reservoir roost may have been just a tiny percentage of the whole, but there was something very special in watching in the twilight these almost phantasmagorical figures of stately cranes drawn, as if by magnetism, through the wood pasture to their communal roost.
Common Chiffchaff Common Crane Hawfinch Pink-footed Goose Red-knobbed Coot SEO/BirdLife White-tailed Eagle Yellow-browed Warbler