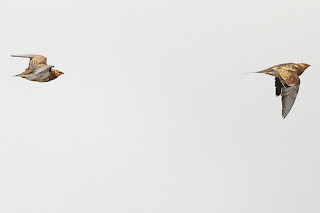 Whatever our pursuit, deep down we all thrive on uncertainty of outcome. Anticipation and hope are the drivers that push us forward, into action. If everything was certain at the level of two plus two equals four it would hardly be worth getting out of bed each morning. We actually do not want arithmetic certainty, but instead an exploration of levels of probabilities and possibilities. Why watch a football match if you knew the result already? One settles down to watch a match with a sense of anticipation, hoping for a memorable experience, a good result....but one never knows for sure what will happen. When I take people out birding in Extremadura, we set out with hopes and a sense of anticipation, but I cannot be totally sure what we species we will see, or how well we will see them. Nor can any nature guide. I could visit the same spot everyday and each visit would be different and there would always be something unexpected. I often wonder what it is like for a cultural guide taking people round a museum or castle, but I guess they would say that even though the exhibits remain the same, each group of visitors are different, and they can never totally anticipate what questions they will be asked.  Last week, having failed on a previous morning to find Pin-tailed Sandgrouse at a usually reliable site, I took the same group back again where we enjoyed prolonged views of this gorgeously-patterned bird both on the ground and in flight (see a photo above taken by Raymond de Smet), but also came across a Whinchat, totally unexpected and the latest I had ever seen one here - November records are very rare.

When I set out alone to go birding, perhaps checking out a regular haunt, exploring somewhere new or carrying out a survery or census, I am motivated partly by the sense of joy of being out in the countryside, but deep down, fundamentally, by the unknown, not knowing what will be the highlights or surprises of the day. I was thinking about this whilst undertaking what at first might appear rather routine, even mundane. I had dug a part of the vegetable garden, and belatedly (because of the combination of my long absence in South Sudan, guiding commitments and rain) was sowing broad beans and planting garlic. As  I placed a clove of garlic into the soil I realised like gardeners and farmers everywhere, I could not predict with full certainty, the outcome of this task. What next year's yield will be like remains largely out of my control. I had prepared the ground, I can try to weed regularly along the row, but how well the garlic would do would depend on rain and temperature, as well as many other factors. This year the crop was modest, the cloves not particularly large, but good enough to provide me with sets for planting and for the needs of the kitchen until next year's harvest. One couldn't ask for more than that. Planting garlic also gave me the company of singing Cetti's Warblers, Hawfnches, a group of five Red Kites overhead, Griffon and Black Vultures, as well as a party of Common Crane....the birding is great in the garden, indeed this week the species list rose to 126 with a photo (see below) sent to me by John Hawkins of a Sedge Warbler he had seen in September whilst he busied himself photographing Hawfinches. 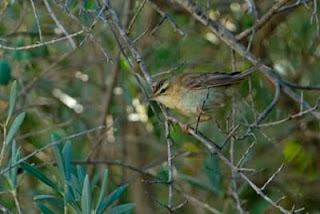 Last week too we had a visit by Richard Allen and his son Jack, a long weekend to get a taster of winter birding here, with plenty of great experiences including masses of cranes, Black Wheatear and Goshawk in Monfragüe. Richard wrote about their visit in his blog, accompanied some of his superb sketches:

I confess that I get a great sense of anticipation too when our guests head out in the morning birding on their own, equipped with their own homework supplemented with any tips I can give them. I look forward eagerly to their return at the end of the day for their news. Who would have thought yesterday that Chris and Lynda would have watched a family of three Greater Flamingoes (rare birds here, that I have seen on fewer than a handful of times) circle in to the Sierra Brava reservoir and settle to swim amongst the roosting Black-headed Gulls.
Greater Flamingo Hawfinch Pin-tailed Sandgrouse Sedge Warbler Whinchat